Human logic is a puzzle made up of mistakes and irrational decision-making. See the mechanisms that mislead the human mind and learn how to get rid of these behavioral pitfalls.

To discover if you need to read this summary of the book "The Art of Thinking Clearly", by Rolf Dobelli, answer:

If at least once you said YES, answer this last question: do you agree that you didn't make the most rational decision?

For this and other evidence, you must read this summary! There are dozens of examples of irrational behavior patterns that we repeat over and over without realizing it.

But why do we act like this? How do we get rid of these pitfalls? Stay with us and find the answer to all these questions!

About the book "The Art of Thinking Clearly"

In 2011, Rolf Dobelli put together a collection of articles he had been publishing in German and Swiss newspapers, turning them into the book "The Art of Thinking Clearly".

It's a study of the various behavioral patterns that we humans adopt, in stark contradiction to the belief that we are essentially rational beings. An important point of each article is that the author not only describes irrational behavior but also seeks to indicate ways to avoid it.

About the author Rolf Dobelli

Rolf Dobelli was born in Lucerne, Switzerland. He is a writer and entrepreneur, founder of GetAbstract, a publisher that publishes book summaries and articles. In his academic background, he has an MBA and a Ph. D. in Economic Philosophy.

In his writing career, he began writing novels on topics such as the meaning of success and the role of randomness in business and life. There were six novels in all, published between 2003 and 2010.

In 2011 he published his first nonfiction book, "Die kunst des klaren denkens", which is precisely this "The Art of Thinking Clearly". The book was an immediate success, becoming a best seller in many countries.

In 2012, Dobelli published "Die kunst des klugen handelns", which could be translated as "The Art of Acting Clearly".

The book speaks of human behavior and is therefore aimed at all people seeking self-knowledge.

In addition, the situations described by the author apply to the daily lives of ordinary people, in the most diverse circumstances, and are therefore not aimed at any specific audience.

On the other hand, by learning about the content, the reader will certainly identify opportunities to improve on professional, financial, personal, relationship, issues, etc.

Main ideas of the book "The Art of Thinking Clearly"

The original edition of the book brings together 52 articles by the author on the subject. For this summary, it would be impossible to focus - albeit synthetically - on all the articles in the book, as each deals with a specific issue.

Thus, we've selected some of the themes and presented them briefly, to give the readers an idea of the kind of explanation they will find when they come across the full text.

Overview: Not everything is what it seems

Rolf Dobelli explains that our minds may be misled into misreading a particular situation. This is the case with the survivor's bias and the illusion of the swimmer's body.

The so-called survivor bias is to learn only from the stories of the survivors, that is, those who succeeded, completely ignoring the fact that the vast majority failed. This view leads us to think that being successful is the rule.

To counter this tendency, we must act consciously, seeking to know the statistics of success and failure, and the stories of those who have failed.

The illusion of the swimmer's body

Another form of self-deception we commit is the illusion of the swimmer's body, which leads us to formulate wrong cause and effect relationships.

For example, people enroll in swimming clubs and schools to get more athletic bodies like those of the great champions.

But swimming doesn't make all swimmers get more athletic bodies. It's the swimmers with the most athletic bodies who excel in the practice of the sport and become champions.

There are numerous situations in everyday life that lead us to such mistaken formulations. And there is no other way to fight this bias than by the pursuit of rationality.

Overview: When overconfidence gets in the way

Overconfidence tends to be a trap for our actions. This can happen when we rely too much on our own abilities (self-confidence) or when we place all our trust in the people around us (social proof).

The trap of overconfidence

It's very common for people to have an overrated sense of their ability to make predictions. These are people who place themselves on the fringes of statistics, believing that they are above average standards of behavior, especially when they touch on topics that are their specialty.

To counteract this overconfidence, you need to take a more skeptical stance, adding even a little pessimism to the projections.

The trap of social proof

At the other extreme, there are situations that lead people to follow the opinions and decisions of the majority, no matter how rational that position is. It's the so-called social proof. Marketing explores this bias of human behavior, which has been rooted since the origins of our species.

Skepticism is also a weapon against this kind of induction to which the mind is subjected.

Overview: Ideas we insist on keeping

Rolf Dobelli presents here are two different pitfalls that can lead us to stick to a decision or idea that simply cannot stand: the fallacy of sunk cost and the bias of confirmation.

The fallacy of sunk cost

When the scenario, conditions, or even motivations change, an ongoing action may no longer make sense. Even so, we may be led to continue with it. Why?

Because we resort to the sunk cost fallacy, whereby, since we have already invested time and resources so far, we have to go all the way. This is a justification we have adopted for not admitting that we've ' changed our mind ', that is, that our previous idea was wrong.

In a rational decision, it doesn't matter what happened in the past. It's worth the perspective of the present in relation to the future. It's this way of thinking that we should seek to avoid being victims of this trap.

From ideas conceived (by ourselves or others), if we begin to feed only on arguments that confirm them, categorically ignoring or rejecting contrary arguments, we are appealing to the confirmation bias.

It isn't difficult to realize that soon we will cling to constructions devoid of logic, just to confirm that original idea.

Overview: Act out of gratitude or fear

Two forces that can also get us off the path of rationality: gratitude and fear. Gratitude can make us prisoners of reciprocity, while fear tends to manifest itself through the bias of authority.

Rolf Dobelli says that this is another behavior that is rooted in humans and that is much exploited by marketing. We have a tendency to feel guilty when we are indebted to someone. Whenever a person does us a favor, we feel obligated to return it.

This can lead us to do things that we wouldn't objectively do simply so that we don't have to carry the burden of being in debt to anyone. The solution to escape this circle is to refuse unsolicited favors.

The bias of authority

We have always been educated to respect hierarchies and authorities and this has been essential to organized life in society. However, authorities also make mistakes. At such times there are always those who fearfully continue to blindly obey them.

Critical thinking must be developed and not put in an inferior position when misconceptions are imposed only by the appeal to the condition of authority.

Overview: Other pitfalls of thought

Dozens of other pitfalls of thought are presented in the book, such as:

They all just confirm that in countless situations we act in an openly irrational way.

Ryder Carroll, author of the book "The Bullet Journal Method", shows that, according to studies, about 70, 000 thoughts pass through our minds every day. That would be enough to write a book every day. That's why he points out an idea to create a manner to organize our thoughts.

To Daniel Goleman, author of "Emotional Intelligence", strong emotions can interfere with attention and all aspects of clear thinking. Instead of trying to eliminate their feelings, people should strive to find a smart balance between reason and emotion.

Rolf Robelli suggests that the first measure to correct these kinds of failures is to become aware of them.

So a practical action suggestion for everyday life is:

Did you like this summary of the book "The Art of Thinking Clearly"?

Are you ready to change your behaviors and act differently after this summary? Did you find this content useful? Leave your feedback in the comments! 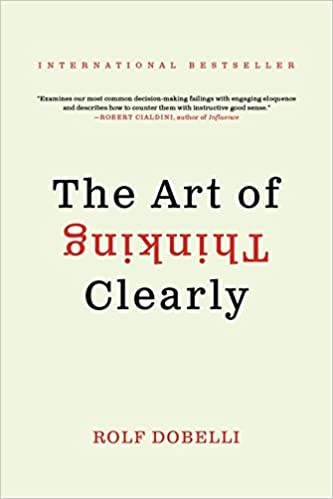