The Art of War - Sun Tzu

Discover how the ancient strategies of the Chinese militar Sun Tzu can be applied both in your business and personal life, helping you to grow!

Do you know what is "The Art of War" book about? It may seem curious, but the original version of "The Art of War" one of the most famous books on strategy, was written over 2500 years ago and still brings relevant insights.

That's why, in this summary we will show how the wisdom of a Chinese general, passed down for centuries, still sounds quite current and can be applied in your daily life.

Are you curious? So let's understand a little bit more about this!

The book "The Art of War"

"The Art of War" is a millenarian work, dated about 500 BC. Its emergence occurred in a way that revolutionized the way of warring and influencing strategists to the present day.

Therefore, in the next few topics, we will bring these concepts written through the 154 pages of the book and you will be able to see how they are reflected in our daily lives.

Who was Sun Tzu?

As a millennial work, there are few information about Sun Tzu. It is not known with exactness where and when he lived and some scholars even question his existence, stating that the book was written by several people together.

However, considering that Sun Tzu existed, it is known that he was a great Chinese general, responsible for great achievements and who recorded his military experiences in this book.

Bringing several strategic analyzes, this book can be applied in both personal and professional life.

Therefore, it is widely indicated for those who seek to improve their skills and apply them on a daily basis, whether in a job interview, in the management of a business of their own, in team management or even in the creation of war strategies, be it armed or market.

What are the key points of the book "The Art of War"?

During this summary, Sun Tzu teaches some aspects as:

This first rule brings knowledge as a principle. A good general, as well as a good manager or entrepreneur, needs to plan and for this he needs to have knowledge.

This knowledge is segmented by the author in 5 topics. They are:

With these principles in hand, the first step is to know your characteristics and your army and then meet your opponents.

In this way, a comparison can be made between them and, in doing so, Sun Tzu said that it is possible to predict who would be victorious, since having information would allow the strategist to devise better strategies.

The chapter "In Combat" brings us the economic and financial consequences of conflicts. Going to war is synonymous with spending. Whether with equipment, weapons, or soldiers feeding, having these expenses under control is critical so that there are no economic and financial problems arising from these battles.

Just as having control, being aware of the battle course is important. Long conflicts bring only losses, so it is up to the general to aim at victory only quickly and objectively, taking advantage of the spoils of war.

As a leader, you need to know how to avoid battle.

Just as in the planning phase, knowing yourself and knowing your enemies will allow you to identify the best course of action and, with the calmness and caution of a skilled leader, attack the weakest point of the opponent's strategy, allowing the domination of the enemy.

Sun Tzu says that the best leader is the one who dominates an opponent without battling, understanding that there are 5 essential points for victory:

According to the book "The Art of War", the biggest responsible to defeat a large army is itself. It is possible that we know how to defeat an enemy, but the opportunity to defeat it will be offered from an error.

So, your army must avoid making mistakes and opening up to defeat, just as you have to be prepared to take advantage of opponents' mistakes.

At this point, the positioning of the armies is very important. Each step must be meticulously thought out and done safely, that is, before leaving with an army for a particular region, know if the victory is certain and if your current point is well consolidated and do not attack if you do not have these certainties.

Allied to planning, Sun Tzu brings us the energy. According to him, the concept of energy in this case can be compared to the colors, because there are 5 primary colors (red, blue, yellow, black and white), but the combination of these colors can provide others that we could never imagine.

The same happens with attack modes, which can be direct (the battle itself) or can be indirect (the maneuvers performed). The junction of these modes of attack generates distinct combinations that are formed according to the imagination and creativity of the general and each method will be suitable for the lived reality.

So, know how to balance the strategies and understand the moment to act directly or indirectly.

For example, without planning, some areas of the army an get unprotected and these points need to be improved.

Therefore, it is fundamental that the general develop tactics that allow the highlighting of the positive points and protection of the negative ones.

As a general and the one responsible for the army, you need to understand the army movement and communication during the battle.

For this, know the size of your army and the path that will be followed. Study the needs of your soldiers, discovering the best way and the best time to carry out this movement and also the best way to optimize communication, allowing the message to reach everyone.

Each situation demands a specific response. Therefore, the book "The Art of War" states that it is up to the army general to adapt to the scenario faced, analyzing advantages and disadvantages and making the best decision. Then, know how to study and adapt to the experienced situations.

Army On the Move

In this chapter, Sun Tzu shows us the reflection that you, as the army general, need to understand how to move around, get to know the environment and interpret the signals given by armies.

The paths traveled will influence the final result, just as the army will show signs of being physically exhausted, and it is up to the leader to be alert to correct these aspects.

An army should not enter into the unknown. Know your battlefield.

The different places where conflicts occur are important in formulating strategies. Just as the leader needs to know the way, is also important to know where he is.

Stopping wars in unfamiliar places makes the army not act in their better way, giving space to be defeated. But, knowing how to put the army on different types of terrain will make the victory get closer.

The knowledge of the enemy comes again as an important point because, as the author says, knowing only about the sufficiency of your army and not knowing about your enemy will be only half way to succeed.

Sun Tzu highlights that as a leader, you have to understand that each situation demands different actions.

Strategies must be developed so that the situation is favorable to the army and collaborates to the enemy army be subdued.

However, recalling the chapter "Maneuvers", each situation must be evaluated and have a response consistent with the scenario faced. Therefore, the role of the leader as the responsible for the strategies is fundamental.

One of the tricks of war is the use of fire to attack and destabilize the enemy. And it must be used in the best way to affect the army and the resources of these enemies.

However, using fire requires prudence and different variables must be evaluated, as the direction of the wind and the right time for the fuse.

Fire was the best weapon at the time when Sun Tzu formulated his ideas. So you have to define your best weapon and the ways to use it, bringing good results to your army and contributing to victory.

The importance of information is constantly addressed by the author as well as the relevance of having this knowledge in advance, promoting a competitive advantage for your army. So, get insider information.

However, to get this information, the use of spies is essential. Through them you can understand the tactics of the enemy and outline new strategies to overcome them.

In the book "Dream Big", Cristiane Correa addresses the idea of personal strategic planning and highlights the importance of keeping a process of continuous improvement to achieve yout goals.

In the work "Focus", Daniel Goleman argues that the practice just make you closer to perfection if is done smartly, that is, if the person who is applying use its time to make adjustments and improvements.

Finally, the book "The Blue Ocean Strategy" brings a new concept of strategy to obtain emphasis on the market. This innovation is based in exploring marketing opportunities in a place without competition, called by the author as "blue oceans".

How can I use these tips in my life?

"The Art of War" is perfectly applicable to our reality and can aid in its development.

The vast majority of shared teachings are applicable in today's business world. You, as the leader of your company, reflect the role of general and strategist. The first and essential step is knowledge.

Then, we extract these lessons:

These are just some of the lessons we can apply to our lives. "The Art of War" offers a wide range of teachings that can always be inserting into everyday life. To do this, you just have to put it into practice!

Did you like this summary of the book "The Art of War"?

Did you enjoyed this content? Remember to let your feedback in the comments, your opinion is very important to us! 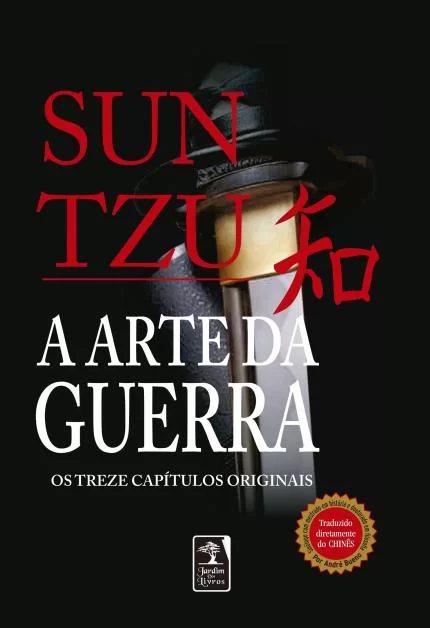