The future is technological. And there are 9 major companies that are investing in AI to make it happen. Know who they are, their interests and how it can impact your life.

Robots can think. They have the ability to create strategies that humans in all life on earth have never considered. The future and the present are technological.

In this summary of "The Big Nine" of author Amy Webb, we'll see that big companies are investing a huge amount of money in artificial intelligence. And that today we already have some intelligent machines to fulfill the functions of our daily lives.

These famous companies will determine the future of AI. Undoubtedly impacting the geopolitical state of the world. Will we head for a bright future or a dark one?

About the book "The Big Nine"

"The Big Nine: How the Tech Titans & Their Thinking Machines Could Warp Humanity" is a book that talks about the course of Artificial Intelligence history and discusses the influence of this technology on economics and politics.

In addition, the author gives several insights and reflects on the companies that will determine AI's future - Google, Amazon, Apple, Microsoft, IBM, and Facebook in the US; Baidu, Alibaba and Tencent in China.

The book was released in March 2019 by the Hachette Book Group and garnered good criticism from leading American authors, who considered the work "reflective and provocative."

About the author Amy Webb

Amy Webb is a great American futuristic reference, including the Thinkers50 Radar Awards. She is currently a professor at NYU Stern School of Business, where she teaches about strategic forecasting.

The author of "The Big Nine: How the Tech Titans & Their Thinking Machines Could Warp Humanity" also wrote the best-selling "The Signals Are Talking: Why Today's Fringe is Tomorrow Mainstream" and is the founder of the Future Today Institute.

This book is intended for computer science or technology specialists who want to delve into Artificial Intelligence research and development. It is also suitable for science fiction lovers or those concerned about the impact of the breakthrough of technology on society.

Main ideas of the book "The Big Nine"

In this summary, we will talk about Amy Webb's predictions about the future of Artificial Intelligence, presenting both sides of the coin.

Download the "The Big Nine" Book Summary in PDF for free

Humans have made great strides in the study of artificial intelligence. The development of artificial neurons was able to assign functions in intelligent machines to construct logical reasoning for a situation.

But can machines really think? Humans have spent a lot of time arguing with each other about what differentiates us from other beings in having the ability to work out a thought.

What would be the thought? What do we rely on to define what we really think? These questions are brought by Amy Webb and answered by herself. And yes, machines can think.

This neural network can build a process of deep learning and beyond; they are able to make decisions and solve problems based on data models.

AlphaGo is a project that has stood out in AI (Artificial Intelligence) studies. Its 2017 release, AlphaGo Zero, completely overshadowed its 2014 version of Go games.

In the old version, someone (human) needed to provide a matching database for him to develop a critical sense to play. Already the new version, with these neurons, did not even need to know what were the rules of the game.

He started from scratch, developed his own critical sense, and after 40 days became able to beat his obsolete partner 90% of the time.

And it goes beyond. Not only did he learn strategies that humans took years to develop, but he created new play approaches that humans weren't even able to think about.

Overview: The Power of Artificial Intelligences

Smart machines, to your surprise or not, are spreading in our daily lives. And we don't have to dig deep to find some examples: Apple's Siri or Alexa, Amazon's virtual assistant.

Some of these AIs are present in cell phones, cars, hospitals, financial and research institutions. Some know how to do simple tasks such as reading text or arranging tennis shoes; others explore their more complex thoughts as political opinion formation.

Amy Webb states in "The Big Nine" that AI's tendency is to grow exponentially over the next 50 years. And also to develop to the capacity of human consciousness (or beyond) and to be integrated into our daily lives.

The speed at which this is happening indicates that in the future new levels of intelligence will be reached by the machines. The development of superhuman intelligence can make them far more intelligent than human ability.

This possible way back has to be carefully watched before we lose control over the machines. Webb questions us, who is in control of these great robots? You probably already most of them.

We have separated the companies into two major world powers: the first, unsurprisingly, is the great US power with Google, Microsoft, Amazon, Facebook, IBM and Apple. On the other side is another major emerging power: China, with companies Baidu, Alibaba and Tencent.

While the US is on the "Iron Throne," its political rival is destined to pull it off the pedestal, even though both countries have economic partnerships.

Leaving this dispute aside, how then are these powers contributing to artificial intelligence research?

The United States has a free-market capitalist ideology. In this way, American companies have invested heavily in projects that return big profits.

According to "The Big Nine" to do this, they must be continually and rapidly creating new products and evolving the technology industry. The consequence of this is to launch more news in the market without knowing if it will be beneficial or not for society. But do you think they care?

The US tech industry is more interested in "building first and asking for forgiveness later". No wonder we have seen some scandals out there, such as the leakage of Facebook user data.

Unlike American ideology, China leads a hybrid way of governing the country, involving socialist and capitalist concepts. Its market is relatively protected by the state.

How exactly? The Chinese technology industry closes its doors to competitors and develops its own technologies. The companies we talk about can be correlated: Tencent with Facebook, Alibaba with Amazon, and Baidu with Google, for example.

To this end, it invests heavily in the research and technological development sectors of its country's universities. This calls for a disciplined practice of an industrial economic and technological plan that the US seems unaware of.

All of this indicates that China has a big plan to become a pioneer in the AI innovation center, and has already invested in building research centers and implementing AI courses in schools.

Again Amy Webb questions us, but why is it doing all this for? China has two main goals: to control its population and to become the world's sole superpower.

And the investment in the Artificial Intelligence sector is clearly a masterstroke. Amy Webb believes the Chinese economy could expand by 28 percent by 2035. Without a doubt, it will be smart machines that will decide who wins this contest.

However, "The Big Nine" warns: the way things are going, humanity can be left behind.

Today, robots help us accomplish simple tasks. Some are even integrated into banking and hospital systems, and the trend is to further automate these sectors. In the future, it may be that these machines integrate into our bodies, making us increasingly dependent on them.

This dependence can bring us problems. Technology, in turn, always has some flaws. Worse, some barrier failures could make us vulnerable to being manipulated into buying what they (the powers) want or even becoming weapons of war.

Have you ever watched Black Mirror? Overall, the episodes in this series bring disturbing situations. However, it may be that these dystopian realities are not so far from the path we are following. Especially if we don't focus our interests on human values rather than these tech titans.

Overview: The Bright Future of Humanity

Amy Web a solution, if we aim our goals in the right direction, we can take a brilliant path. Some attention could be taken by the big powers and the tech giants involved.

The United States could start testing its products before launching; China could fail to direct its technological investments to its military army.

And both could direct their desire to invest in technology and the development of humanity rather than compete with each other and use us as pawns for this mere game of chess.

In the book "Sapiens: A Brief History of Humankind", author Yuval Noah Harari reflects on the scientific advances of the human species and claims that today we are already a union of man and machine. He adds that we are moving towards a new species: the superhumans.

Malcolm Frank, et al, in "What To Do When Machines Do Everything" addresses the problem of robots replacing jobs, and how we can turn it into an opportunity. Success will come to those who keep up with the digital age, developing solutions side by side with the machines.

Finally, in "Você, Eu e os Robôs", Martha Gabriel discusses the changes caused by new technologies and how this influences who we are. The future is uncertain, but we have to prepare ourselves for the new era.

AI is no longer something fanciful; It is present and part of our lives. The author separates a topic to say how you can adapt to this Era:

Did you like this summary of the book "The Big Nine"?

Did you enjoy this summary of the book? The future development of AI could very well change our world's history, for the better or worse.

Want to know more about "The Big Nine"? Be sure to purchase the full book by clicking on the image below! 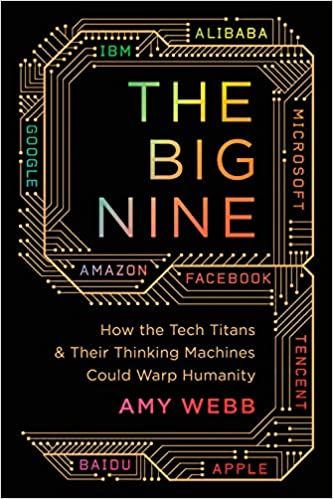