Be prepared to deal with the unexpected and take advantage of surprising situations that can turn your life into a success story.

Have you ever realized that we are always looking for a logical explanation for the facts? This is because the human mind has not been prepared for black swans and tries to force a coherent explanation, where there is often none. Nassim Nicholas Taleb explains this train of thought in the book "The Black Swain".

It is much easier for us to remember a sequence of events when they are connected than when they are random. And often those events are Black Swan events. In order to understand it, the author introduces the "Mediocristan" and "Extremistan" concepts.

Got interested to learn more about it? Stay with us in this summary!

About the book "The Black Swan"

The Black Swan Logic (2010), from the original "The Black Swan" presents an insight into randomness and the problems that trying to make predictions can bring.

Nassim Nicholas Taleb shows us how to deal with events called black swans and how not to fall into the trap of people calling themselves experts.

About the author Nassim Nicholas Taleb

Nassim Nicholas Taleb is a professor of risk engineering from Polytechnic Institute of New York University, president of the investment company Empirical, group advisor at Universa, and mega-investor in the financial market.

In addition, Taleb is the author of other books such as "Antifragile", and "Risking Your Own Skin: Asymmetries Hidden in Everyday".

The content of this work is strongly recommended for all people who want to reach financial independence, for those who wish to minimize risk, and for someone who is interested in epistemology.

Main ideas of the book "The Black Swan"

Overview: Part I - When All Swans Were White

To begin with, let us understand what the origin of the Black Swan expression is and why it is the book's name. Before 1697, teachers confidently taught the children of European schools that all swans were white.

They had little reason to think otherwise since all the swans already examined had the same plumage of snow. But the Dutch explorer Willem de Vlamingh landed in Australia and among the many creatures, he encountered dark feathered birds that looked remarkably like swans.

Once they were observed, they were as unmistakable as they were unimaginable, and forced the Europeans to revise forever their concepts of "swan". Over time black swans have become more common. Just because you have not seen them doesn't mean they don't exist.

Unlikely events seem impossible when they are in the unknown or in the future. But once they happen, people assimilate them into their conception of the world.

Nassim Nicholas Taleb explains that the extraordinary becomes common, and experts, as policy and market analysts, stumble because they have not predicted the (now seemingly obvious) occurrence of the unlikely event.

Think of the advent of World Wars I and II, the terrorist attacks of September 11, the bursting of the Internet action bubble in the 1990s, or of world-changing inventions such as the internal combustion engine, the personal computer, and the Internet.

These events and inventions have come "out of nowhere", but in hindsight, they seem almost inevitable.

In Part 2, Taleb explains how and why our mind seeks a pattern in all events, even when there is none. Stories help people remember and understand the past. Think of a typical profile of a successful businessman in a business magazine.

The narrative begins in the present after he has become rich, beyond his most ambitious dreams. Then we return to its humble beginnings. He started "out of nowhere" and wanted to get rich, faced obstacle after obstacle that came his way.

But he made wise decisions and overcame those who advised him to be cautious. As a success built, he has accumulated a fortune. He retired early, married a model, and now has bright children.

He is a superman, an inspiration. Now consider an alternative hypothesis: he was lucky. His virtues had nothing to do with his success. He is essentially a lottery winner.

The public looks at his life and invents a story about how brilliant he was, when in fact he was just in the right place at the right time.

This is the "playful fallacy": people underestimate luck in life - although they overestimate it ironically in certain games of chance.

Even the entrepreneur is a victim of defective thinking. They look at themselves, and comes to a sweeping conclusion, like, "If I can do this, anyone can!"

Not all success is luck. In some professions, skill is important (for example, if you are a dentist), but luck dominates in other cases. In the case of the inspirational entrepreneurs, consider the people who started from the same place as they.

Where are all people with similar locations who started out like them and have the same attributes? Are they also rich? Or homeless?

The mind uses many more simplifying schemes that can lead to error. Once people have theories, they look for evidence of confirmation, which is called confirmation bias.

To his theories work, people soften heels in a time series or historical sequence, seeking and finding patterns that are not there.

In this overview, the author explains the concepts of Mediocristan or Extremistan.

The human mind tends to soften the rough features of reality. Does it matter?

It can matter, and much, depending on whether you are in Mediocristan or Extremistan. Where are these strange places? Nowhere.

They are, in fact, memorable metaphors to remember two very different classes of natural phenomena.

Mediocristan refers to phenomena that you could describe with standard statistical concepts, such as the Gaussian distribution, known as the "bell curve".

Extremistan refers to phenomena in which a single event or person can radically distort the distribution.

To understand the difference, think about human height versus movie ticket sales.

While a sample of humans can contain very tall people (maybe a two-meter person) and some people very short (maybe five feet), you will not find anyone 3, 000 feet tall or 3 inches tall.

A successful movie can have sales that exceed the median value by such a radical extension that modeling the sample with a Gaussian curve is misleading - thus making the notion of medial value meaningless.

You'd better use a different kind of curve for these data, for example, the power law curve from the work of Vilfredo Pareto (from the famous 80/20 law). In a distribution modeled by power laws, extreme events are not treated as outliers.

In this overview, Nassim Nicholas Taleb explains why being in Extremistan can be dangerous and why to beware of the experts.

Being in Extremistan might not be so bad if you could predict when they occur and how big they are. But no one can do this accurately.

Consider successful movies. The writer William Goldman is famous for describing the secret of Hollywood successes: no one can predict one. Stock prices are the same. Anyone who claims to be able to predict the price of a stock or commodity years in the future is a charlatan.

However, magazines are full of the latest advice on what the market will do. Same for technology.

Do you know what the next big thing will be? No. No one knows. Prognosticators often miss important big events - the black swans that propel history.

When all you have is a hammer, everything becomes a nail.

If all you have are Gaussian curves, sigma (standard deviation) and moderate and common randomness, you'll see bell curves everywhere and explain the data that is not confirmed as "outliers" or "noise".

In addition, humans follow the herd and seek expert guidance. However, some issues cannot have experts because the phenomena that the expert should know are completely random.

Of course, this uncomfortable thinking requires a palliative, which is to think that the world is much more organized and uniform than it usually is. This calming belief usually serves people well.

Richard Thaler, in his book "Misbehaving", explains that human beings do not present a rational behavior in their purchasing decisions, going against what is expected by traditional theories of economics. He assumes that real people act in predictably irrational ways, developing the theory of "Behavioral Economics".

In the book "The 80/20 Principle", Richard Koch presents how to use the Pareto Principle, which states that 20% of our efforts equal 80% of our best results, in professional and personal life. He claims that the natural state of the world is an imbalance, not equilibrium.

Finally, in "Mindset", Carol Dweck presents two types of mindset: growth and fixed. People who have a growth mindset like challenges because they believe that error is a source of learning, they would not be afraid to prove their own beliefs and admit that they still need to learn.

Did you like this summary of the book "The Black Swan"?

Did you get the black swan concept understanding its basis? Did you find this content useful? Leave your feedback in the comments! 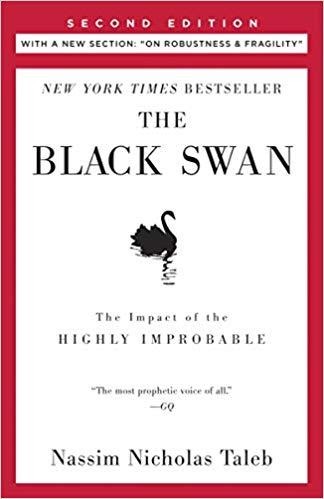