Understand how one of the greatest samurai in history can help you design strategies for today.

The great Japanese samurai are characterized by their serenity, calm, concentration, and objectivity. Their fights are very well-thought-out and calculated, and for that, a combat strategy is necessary to guarantee the victory.

In this summary, we will be able to analyze how the combat strategies of one the greatest samurai of all time, Miyamoto Musashi, in this book "The Book of Five Rings" can be reflected in the present and, mainly, in the business world.

So, prepare your armor, and sharpen your katana and let's learn this ultimate strategy!

"The Book of Five Rings"

Written in the 17th century and originally published as Gorin No Sho, this book is a treatise on martial arts drawn up by one of the greatest samurai ever to have existed.

During its 146 pages, Miyamoto Musashi divides his teachings into five chapters that will give a broad insight into the strategies of a great martial arts master.

Who was Miyamoto Musashi?

Miyamoto Musashi was one of the most famous samurai who ever lived. His skill was known throughout Japan for winning his first duel at the age of 13 (with a wooden sword!) and for having performed over 60 duels in total, winning them all.

Based on his success, Musashi compiled his studies of dueling and combat strategies into this book, whose teachings can be replicated to this day.

Born in 1584, Musashi secluded himself in a cave so he could put his teachings on paper, published his book in 1645 and died the same year. However, his experiences echoed through the following centuries.

Who should read this book?

This book is useful for all who seek to understand a little more about strategy because here we have the thoughts of a great Japanese strategist.

And you can also understand how these strategies reflect in our daily lives.

Which are the key ideas of "The Book of Five Rings"?

"The Book of the Five Rings" brings the strategic teachings of Miyamoto Musashi divided into five chapters, in which the following issues will be addressed:

In this summary, we will cover each of these chapters and thus bring out the main teachings of Musashi.

In this first chapter of the book, Musashi seeks to bring the starting points in designing a combat strategy. As he says, he seeks to "consolidate the structural foundations of a straight road".

Therefore, this first chapter is called "Earth", because it is the beginning of the work and will define important concepts for the course of the book.

The first point is the definition of "military art". During his studies, the author uses this term to refer to the art of sword fighting.

Musashi was also responsible for the creation of the style of combat with two swords used simultaneously since for him it was not correct to have a sword sheathed during such a situation, because the weapons should be used in the best way.

Knowing this, the importance of using the tools stands out. A samurai must know the instruments at his disposal and know how to use them, knowing the advantages and disadvantages of each one of them.

The author even makes a comparison with carpenters, who know their tools and promote continuous improvement of them.

Musashi himself was a samurai aware of the tools at his disposal. The book brings a story in which he had a duel marked on an island and, meeting his opponent, killed him with the oar of the boat.

Besides the weapons, the rhythm shows an important aspect to be considered by the samurai. Understanding the best rhythm to be employed in battle, in order to help overcome the enemy, is essential to success. A samurai must know the rhythms to be imposed in the battle and be trained in all so that he uses them in the best way.

Considering these aspects, the samurai should have his goal well-defined and understand the variables that surround him, learning about them, and understanding how to use them when necessary.

This is the basic path to be defined, the "Earth", and after that, he must also know the techniques to be used, as we will see in the chapter titled "Water".

Water is an adaptable element: no matter where you put it, it will change its shape according to the container.

Using this characteristic, the author brings in this chapter the techniques he created for his school. As has been said, Musashi has developed a new style of sword fighting, and therefore, these techniques that he will present.

We will not go through these teachings in-depth, as it is not our primary goal, but descriptions are given of how the samurai should behave in battle, the importance of having a broad and analytical view, how to hold the sword, movement, guard positions, blows, among other techniques.

However, while this chapter may seem more technical and focused on sword fighting, we can see that Musashi focuses on differentiating tactics to surprise enemies.

This is because, when a samurai takes new techniques to a confrontation, he catches the enemy by surprise, gaining an advantage over him and increasing the chances of victory.

Allied to this, you must adapt your fighting style to the rival's fighting style, that is, your style should, like the rhythm, be adapted from your enemy's fighting model, causing you to use blows with a greater probability of effectiveness.

We conclude this thought by quoting the following passage from "The Book of Five Ring":

"Once the principles of the art of wielding and winning are mastered, it is possible to defeat any adversary - no matter who he is."

In the chapter of Fire of "The Book of Five Rings", Musashi deals with the combat itself, bringing a study of the situations confronted in conflicts, and how the samurai or army should act. As he says, fire can be strong or weak, large or small, but it is always accompanied by a great power of transformation.

Attack and counter-attack techniques are presented, showing that the combat is about surprising the enemy and having a better strategy than his. For this, this chapter brings different combat tactics, explaining where and how to attack.

Some of the battle tactics proposed by Musashi are:

At the end of the chapter, Miyamoto Musashi tells us that by understanding the timing of using each of the tactics and having the commitment required for training, triumph is guaranteed.

In the fourth chapter, "Wind", Miyamoto Musashi explains the need to know your opponent, presenting the techniques of the other schools, compared to his and understanding the strengths and weaknesses of each of them.

The author, carrying out this study, seeks to show in "The Book of Five Rings", the importance of knowing other techniques, so that, in the moment of battle, reduce the chances of being surprised.

This is because, as has been treated during much of the book, a master in military art must be prepared for the scenarios he will face, plotting strategies against the enemy, and should be directed to prevail over whoever fights.

Musashi ends his thinking of this section of "The Book of Five Rings" as follows:

"Even without revealing the deeper or shallower aspects of other schools, all should seek to understand."

In other words, always research, know and understand your opponents, and this will bring positive results.

The "Vacuum" is defined as the absence of things, the unknown, the nothingness. Thus, Musashi finalizes his book reflecting on how the samurai must reach the "spiritual vacuum", understanding the techniques and absorbing all the knowledge.

A samurai must always learn military art, practice the duties of a samurai, develop his perception and vision, be ready and prepared, and eliminate doubts.

This is where the samurai will reach the vacuum because when you master, practice, and execute a technique, the process happens naturally, that is, becoming a habit that it's so internalized that happens automatically.

But for this, the discipline is fundamental: with it, you can understand the five rings and encompass them into one.

In "The Prince", by Nicolau Maquiavel, the author explains that it is important to know each weapon, its pros and cons, because each one will be used in a certain situation and from there, bringing different results.

In the book "The Art of War", the importance of information is constantly addressed by the author Sun Tzu, as well as a transformation of having this knowledge in advance, promoting a competitive advantage for his army. So, look for privileged information to better make your decisions.

Finally, the book "Blue Ocean Strategy" brings a new concept in strategy for gaining prominence in the market. This innovation is based on exploring market opportunities in which there are as yet no competitors named by the author of "blue oceans." In this way, there is a separation of opponents and a differentiated form of growth.

So, how can I be a samurai in the business world?

During this summary, it was possible to understand Musashi's theory and how he developed this new school of sword fighting techniques. However, as promised at the beginning of the text, let us understand how we can apply these thoughts today.

For this, consider that you are the samurai and that in the business world, you are constantly battling.

Did you like this summary of the book "The Book of Five Rings"?

Did you enjoy the old teachings of this legendary samurai of the Edo Period? Do you believe these teachings will be useful in your life?

If you want to purchase Miyamoto Musashi's book to get the full teachings, click on the image below: 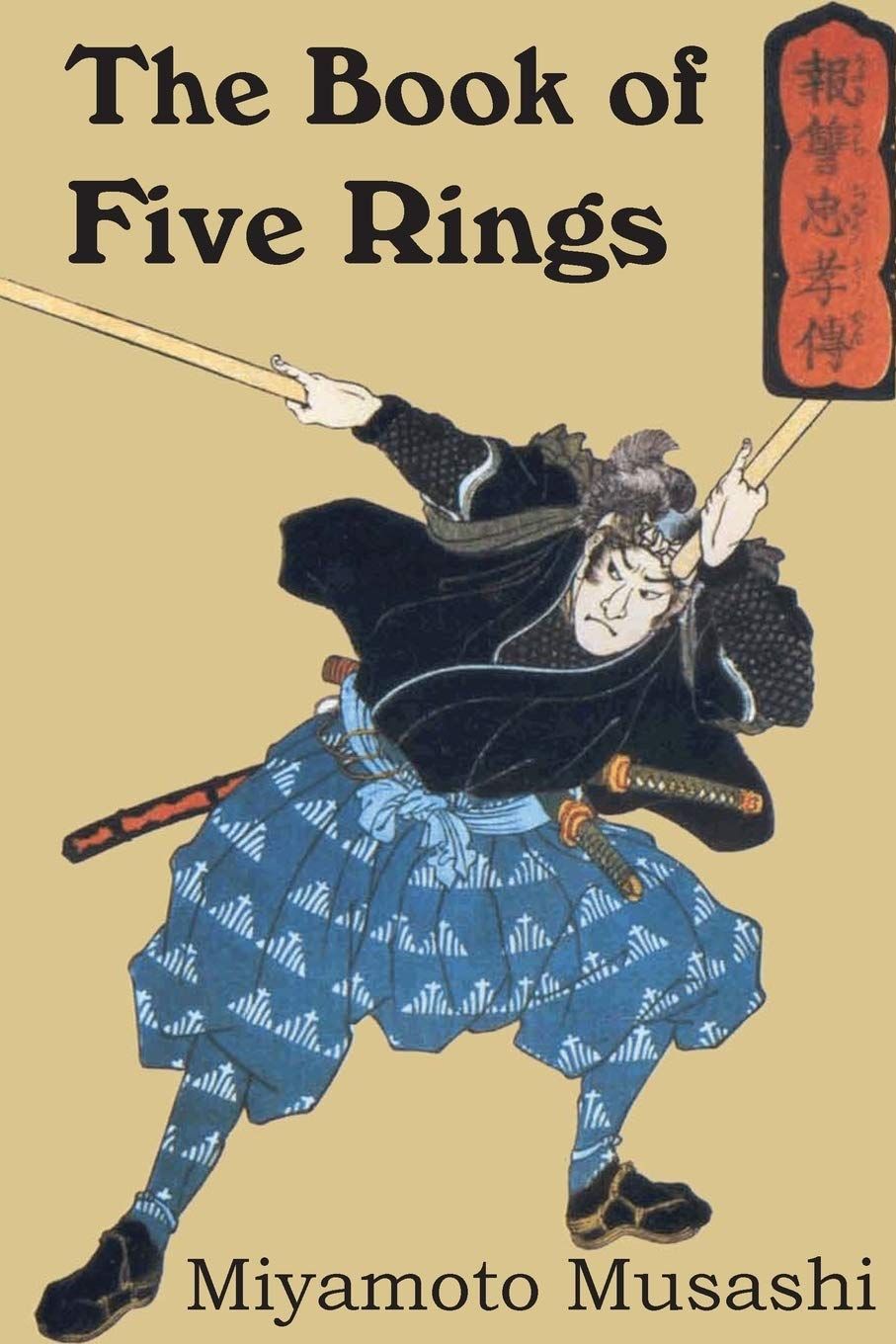