Discover how randomness is more present in our lives than we imagine, besides being able to influence the paths we follow!

You may be wondering what is the relationship between the way someone drunk walks and the subject of this book. "The Drunkard's Walk", is actually an analogy referring to random movement, which can also be a metaphor for our lives.

The author, Leonard Mlodinow, says that "life is both hard to predict and hard to interpret", mainly because it is led along different paths and by several random events.

Therefore, the main objective of this book is to talk about the power of influence of randomness in our lives and in the world around us, allowing us to observe and interpret events from a different angle.

About the book "The Drunkard's Walk"

"The Drunkard's Walk: How Randomness Rules Our Lives" is divided into 10 chapters and 272 pages in its original version.

The book is a best-seller and a notable book by The New York Times, as well as being classified as a great book in Amazon's scientific and mathematical categories and has good acceptance by the scientific community in general.

Furthermore, in a didactic and embracing way, this book discusses how we are influenced by chance. Through a scientific and mathematical vision, Leonard shows how to perceive random moments to better deal with them.

About the author Leonard Mlodinow

The author, Leonard Mlodinow, has Ph. D. in physics and currently also writes for The New York Times, in addition to writing science dissemination books.

He was also the screenwriter for the acclaimed science fiction series "Star Trek".

Leonard collaborated with Stephen Hawking in writing the books "The Grand Design" and "A Brief History of Time: The Science Classic Made More Accessible", and received compliments from Stephen for the work we'll discuss in this summary.

To whom is this book dedicated?

This work is indicated for people with a greater interest in the application of statistics and probability in human and social activities, such as sports, medicine, investments, arts, nature, and many other areas.

According to the author, Leonard Mlodinow, it is impossible to read this book without better understanding and noting the influence of random events in our lives, in all situations.

Main ideas of the book "The Drunkard's Walk"

Download the "The Drunkard's Walk" Book Summary in PDF for free

The Laws of Probability

According to Leonard, probability can be based, in general, on three simple laws, which, when applied correctly, can help to understand the daily world and nature.

Even unconsciously, the laws of probability are often applied to decision-making situations:

What is the difference between probability and statistics?

The doubt about the difference between probability and statistics is habitual and, with touchable examples, the author says that the distinction is that they are inverse and, even so, complementary sciences.

While probability searches for understanding and forecasting phenomena based on predetermined possibilities, the objective of statistics is to understand such probabilities based on verified information.

Why do we underestimate the effects of randomness?

Humans are predisposed to not believe what they don't understand. Randomness, through probability and statistics, can often be one of the underestimated actions due to its apparent complexity.

Another factor that makes randomness to be underestimated is that, in many times, random events can look like non-random events. But how could this be possible? In truth, the explanation is related to the number of times we pay attention to certain things happening.

Have you ever felt like you always choose the slowest market queue? Or that during a traffic jam, even when you change the road lane, the opposite is always going faster? I'm going to tell you something: this isn't bad luck, it's the availability bias.

This term is the source of much psychological research and is nothing more than the unfair importance we give to the most vivid (or available) memories. Therefore, this bias is capable of gradually distorting our perception of how some things work.

It makes us give importance to things that impact us more than things that happen frequently.

Therefore, the probability that you choose the slower queue is the same for all of them, however, we give more importance to the queue when it does not behave as we were expecting, which makes it seem that we always choose the "wrong" way.

What would self-deception mean to you? For the author, self-deception is far from lying to yourself, it is actually the act of believing in what is not real, even when we don't know it.

Self-deception is related to how we react to processes that lead to flawed judgments and decisions, or, at least, to situations that leave us in doubt.

It is also directly linked to naive realism, which the author defines as the precept that people seek to believe that things are exactly what they seem to be. And, we know that's usually not exactly like that, is it?

The human mind is determined to find a specific reason for everything, so it has difficulty understanding and accepting the influence of random conditions.

Therefore, it is interesting to ask ourselves what is the real contribution that chance has in relation to the circumstances of life we find ourselves in currently. If you think about it, certainly there was some unexpected event that changed the course of your plans in a big way.

How do we make decisions in face of uncertainty?

Leonard Mlodinow says that, in principle, the ability to make judgments and make intelligent decisions in the face of uncertainty is a rare skill. Despite this, the author declares that it is possible to improve it with experience.

Evolutionary factors, personal experiences, knowledge and feelings are some of the complex aspects that influence the analysis of human situations.

Scientifically, it is possible that different brain structures reach different conclusions, which compete with each other until one of them predominates thus demonstrating the complexity of human uncertainty.

Beyond the surface of dedication

There is a long way of randomness and imprecision between the beginning and development of a successful project until its success itself.

Many of those who have achieved success in economic, family, business, or other interests have been impacted by random effects with unexpected consequences.

According to the author, the effects of randomness are more the rule than the exception, they just go unnoticed, and "random influences are as important as our qualities and actions".

That doesn't mean that successful people aren't deserving of it, Leonard just points out that there is an influence beyond dedication, which you can't measure or predict.

Considering people's triumph in proportion to their wealth or fame, for example, is a misjudgment. That's because it is impossible for us to observe people's individual potential, we only see their results.

You may have heard scientists, writers and poets stories, for example, who only had their work recognized after their death. Does that mean they weren't brilliant in life? Not! They just haven't had their results exposed and affirmed before.

Many people as talented as those we now recognize as synonymous with talent haven't had the opportunity to be recognized yet, but based on probability, it's important to remember: the harder we try, the more chances we have of making it!

At first, we know that science should evidence exact calculations, experiments and results about how things work above the scientists' own intuition, right? So what would be the difference for betting, sports and business, for example?

Mathematical Expectation is a concept considered very important in all decision-making processes. It is nothing more than balancing the benefits and harms of each choice before deciding. Surely you've already applied mathematical hope to your life, even if you have no idea about its name or how it works.

Like the availability bias, the confirmation bias can be seen, once again, as our mind trying to play a trick on us.

This bias is nothing more than unconsciously reaffirming what is already in our mind, even though we have opposite evidence in the same proportion.

You know when you ask people for their opinions and, in the end, you decide what you already wanted to do? The confirmation bias is there!

This can be dangerous, as it changes our perception of facts. For example: someone pessimistic, observes only the bad points or possible failures, not appreciating the good part. On the other hand, an optimist can just enjoy the situation, without considering harmful situations or being prepared for them.

People who don't give up

We always hear overcoming stories from important people about how, in most cases, they received many "nos" until they achieved what they desired.

In mathematical terms, the probability of you hitting a basketball hoop depends on the amount of existing attempts. Even if you are terrible at basketball, if you try to score the point enough times, at some point, even by chance, you'll make it!

The more we try, the more chances we have of succeeding, and, furthermore, we improve along the way. It means that next time we'll need fewer tries, and next time even less!

This is how it is in our life and with our goals. What do successful people have in common? They don't give up on the first try.

In "Sapiens: A Brief History of Humankind", it is discussed how intellectual development made organizational and technological evolution possible. The author, Yuval Noah Harari, believes as does Leonard that human analysis and reasoning skills can change the way everything works.

Duncan J. Watts, author of "Everything Is Obvious: Once You Know The Answer" affirms that we are predominantly influenced by common sense, often in a superior way to science and math. He reveals, then, the importance of cultivating an uncommon sense, so you can look at things as they really are.

"Thinking, Fast and Slow", by Daniel Kahneman, deals with the functioning of the human mind when we are faced with the need for decision making. In this book it is possible to understand and get along with these situations in a smarter way.

Did you like this summary of the book "The Drunkard's Walk"?

Did you have any idea of the influence of randomness in so many ways and how we apply probability even unconsciously?

What do you think of leaving a comment about a random event in your life that changed the way some things were happening?

Take the opportunity to leave your feedback about the summary, and if you want to get the full version of the book "The Drunkard's Walk", click on the image below: 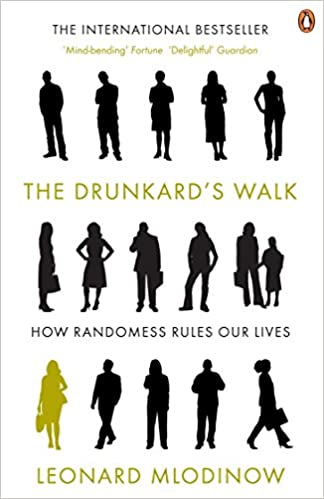