The Five Dysfunctions of a Team - Patrick Lencioni

Are you the leader of a team? Optimize your relationship with all members, learn how to overcome challenges and extract the best results.

We've all worked as a team at some point in our lives. And when we work as a team, problems can always occur, because people think differently and each one tends to act according to their convictions. Patrick Lencioni gives guidelines to extract the best from your team in the book "The Five Dysfunctions of a Team".

By analyzing this scenario, do you want to know how to optimize the work on your team and thus achieve the best results?

In this summary, we've separated the bests insights from the book in order to facilitate your comprehension! Don't waste your time and stay with us in this reading to leverage your results avoiding some common leadership mistakes!

About the book "The Five Dysfunctions of a Team"

Originally released as "The 5 Dysfunctions of a Team" in 2002, this book presents 5 challenges to be faced by high-performance teams.

For this, the author presents us with a fable where these challenges can be identified and then goes deeper into the concepts, bringing solutions so that managers can achieve better results.

About the author Patrick Lencioni

Patrick Lencioni dedicates his work to the training of high-performance teams. In addition to authoring best-selling books, translated into 25 languages, and with 4 million copies sold, he is a consultant to great CEOs and their executive teams.

A featured speaker at several world conferences, Patrick is the founder of The Table Group, an organization focused on improving business health, employee engagement, and stimulate teamwork.

The reading is recommended not only for leaders who want to optimize the relationship of their teams but also for all members of the group, so as to provide an optimal alignment of efforts, always in pursuit of the achievement of enhanced performance.

With the techniques presented in the book "The 5 Dysfunctions of a Team", your team will encourage collaboration, commitment, and focus on results.

Main ideas of the book "The Five Dysfunctions of a Team"

The first challenge is the lack of trust among team members.

This is the first and most important dysfunction since the rest can be triggered. The lack of trust makes it difficult to share individual weaknesses and vulnerabilities, which jeopardizes the effective development of the group.

The exchange of ideas is essential, whether for the correction of failures or for the union of forces. The potential for the evolution of a team can only be explored from a mutual trust relationship.

While members of trustworthy teams ask for help, admit their mistakes, apologize and are focused on giving feedback, teams that lack this attribute have the following symptoms:

To solve these problems and avoid further unfolding, the author suggests the following exercises:

One practice that is very helpful in resolving this problem is the Team Effectiveness Exercise.

Although it may seem invasive, at the end of the exercise you may see a much higher level of confidence. The methodology consists of each team member being "analyzed" by their colleagues.

This analysis consists of telling the person's best contribution, the points of improvement, and what he or she should eliminate completely.

This exercise will make team members open up to each other and gain greater confidence to work together.

When facing the scenario of poor confidence, it is up to the leader to set an example and be the first to show vulnerability, for example, those who are led will feel more encouraged to invest in the proposal.

The simulation of weakness can have the opposite effect, weakening the team's ideal of unity.

Thus, by building a relationship of trust, the team will be more willing to engage in conflicts that will bring positive results, as we will see in the next topic.

The lack of trust in the team inhibits involvement in conflicts. However negative it may seem, at first, conflict in the workplace is fundamental, because it is from there that ideas arise and are improved, arriving at the best possible solution.

The sense of conflict here is closely connected with positive, constructive discussion.

Different opinions broaden the glimpse of ideas and lead to a greater likelihood of problem-solving.

Lack of confidence consolidates a communication barrier, which ends up hindering the team in its development process and preventing the best fruits from being harvested.

Understanding this challenge, we realize that teams that are willing to discuss healthily, engage in any conflicts, and solve problems quickly, have productive meetings, and evaluate everyone's ideas.

Characteristics of groups with communication failures and inhibition for discordances in discussions:

Aiming to reduce this imbroglio, while miners will be responsible for "digging" problems, causing them to surface and can be discussed in a healthy way.

The role of the leader in this situation is critical to the success of the discussion. When the team engages in some kind of conflict, the leader should moderate the discussion so that it ends naturally.

A leader should not try to avoid or end the conflict so that the discussion can occur and be good for the team.

In generating conflicts, group members begin to take into account different opinions of different people and this makes them commit to new ideas, knowing that everything has been taken into account.

Patrick Lencioni has a phrase that defines very well the connection between the former dysfunction and this:

"When team members promote productive conflicts and take into account each other's perspectives and opinions, the group can make a commitment to trust, and abide by a decision knowing that you have benefited from everyone's ideas."

So, as conflicts don't happen, there is a difficulty in stimulating team commitment. "The Five Dysfunctions of a Team" explains that there are 2 main reasons for lack of commitment: the need for certainty and the desire for consensus.

In the first, people don't compromise because they are not sure if the ideas would be the right ones. In the second, it shows people's desire to find a consensus to commit.

Going forward and changing directions without hesitation, clarity regarding priorities and directions, and alignment with goals are some characteristics of committed teams.

Teams that suffer from the challenge of lack of commitment have the following characteristics:

Among these practices suggested by Patrick Lencioni, we can highlight the mass message, where at the end of each meeting, the team should review all the decisions taken and the objectives outlined.

At that moment, the group realizes that they may not have understood everything in the same way. This tool allows an alignment between the team and establishes the commitment to what was discussed and defined in that meeting.

In a scenario where employees are not committed to the team's goals, whether for reasons of certainty or consensus, it is up to the leader to encourage and guide everyone towards a definition and thus encourage everyone on the team to adhere to this new challenge.

In a group where members trust each other and engage in productive discussions, provoking commitment will be much easier.

Overview: Avoiding Responsibility for Others

And this is a direct consequence of the lack of commitment because as people don't engage with the objectives outlined, neither do they take up their respective responsibilities.

The lack of confidence only aggravates this problem, because the team members are not comfortable in assuming the responsibilities and, failing to do so, the tasks are left without one in charge of them, generating complications for the group's performance.

An effective team must take responsibility for everyone. Thus, all underperforming members will try to improve, question what is being done, and create a respectful relationship among members as everyone pursues high performance.

On the other hand, a team that does not focus on responsibilities has the following characteristics:

Among these, the publication of objectives and standards is a good solution, because, from this, the leader must define with the team, making clear, what they should achieve, what are each one's duties and how everyone should be behave

By signing this agreement with everyone, it is easier and more natural for each member to be charged.

Often, the leader creates the problem of lack of accountability. So you, as your team leader, must encourage your employees to take responsibility.

It should also be made clear that the leader is not the only one who assigns responsibilities, this is a joint work of the whole team, where everyone is held accountable and everyone is charged for it.

Overview: Lack of Attention to Results

We have now reached the fifth and last dysfunction which is the lack of attention to results. In a way, this challenge is the end result of all others, as they all lead to this disturbance.

The big problem at this level is that people tend to focus on goals that are not the group's primary goals. At this point, they give priority to personal goals rather than collective outcomes.

According to Patrick Lencioni, with this lack of focus, the team is hampered and consequently, their results are as well.

A committed, results-focused team often thinks together, with fewer distractions, celebrates success, and regrets failure. The team that suffers from the lack of attention to the results suffers from the following problems:

Patrick suggests these two exercises to increase team engagement with results. The public declaration of results is to commit to a goal publicly, causing the team to run after the goal.

The reward based on results, as its name says, is to reward employees for their good performance. This will encourage everyone to do their best to achieve goals and be recognized for it.

The leader is the team guide. Thus, it is your responsibility to guide the group and establish management for results.

For this, you must be objective and know how to recognize and reward only those who make real contributions to the team.

In addition, it is up to the leader to also be focused on the goals, because if he is not, the subordinates will feel entitled to do the same.

According to John C. Maxwell, author of the book "Leadership Gold", the best leaders are those who know to listen. Good listeners know what is happening because they are watchful. They learn more than others because they absorb better from different places.

In the book "Developing the Leader Within You 2.0", John C. Maxwell explains the importance of a leader in demonstrating that he cares about his team, and also develop other leaders in the work environment.

Finally, in "A Whole New Mind", Daniel H. Pink shows that empathy is also related to the persuasion world and allows the creation of strategies and actions that promote a good coexistence with the team members.

As a manager or team member, your role is to put into practice the lessons learned in this article.

Did you like this summary of the book "The Five Dysfunctions of a Team"?

Are you ready to leverage your team's results by applying the lessons learned here? Did you find this content useful? Leave your feedback in the comments! 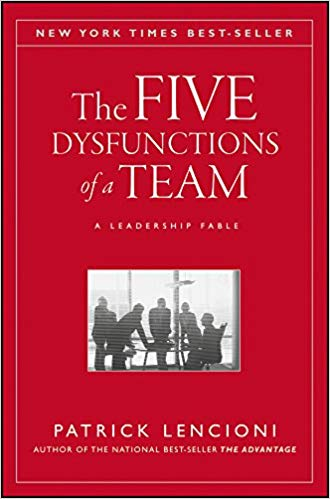