Understand the contemporary concern of companies and governments for happiness and the development of well-being quantification technologies.

Are you happy? In "The Happiness Industry", the philosopher William Davies shows us that the development of the "science of happiness" aims to quantify subjective elements of human nature, in order to optimize the performance of workers.

In recent years, this is the issue that permeates the most diverse sectors of our society. Body monitoring apps, mindfulness, lectures with religious gurus, and self-help books converge in a culture of maximizing well-being.

Do you want to understand how the government and big companies sell us happiness? Then this PocketBook is for you!

About the book "The Happiness Industry"

In "The Happiness Industry", author William Davies tells us how marketers, economists, and their leaders do to measure their happiness and how they take advantage of it.

The book is an in-depth analysis of how well-being is becoming a product and what the consequences will be.

About the author William Davies

William Davies is an English sociologist whose work focuses on the history of ideas and how expert knowledge shapes today's society.

He is co-director of the Center for Political Economy Research in London and has contributed frequently to several newspapers and periodicals, such as the New Left Review, The Guardian and the London Review of Books.

Davies is also the author of the books "The Limits of Neoliberalism: Authority, Sovereignty and the Logic of Competition" and "Nervous States: How Feeling Took Over the World".

The book "The Happiness Industry" is recommended for people who seek to understand the role of happiness in modernity and the way Big Data operates in our society. Business leaders are attracted by the content of this work.

Main ideas of the book "The Happiness Industry"

Download the "The Happiness Industry" Book Summary in PDF for free

Overview: The science of happiness

In his analysis of happiness in contemporary society, the author William Davies traces an overview of the thinkers who sought to unveil how we think and act.

In the first chapter of the book "The Happiness Industry", he presents two elements that underlie this "science of happiness": the utilitarianism of Jeremy Bentham and the psychophysics of Gustav Fechner.

According to Bentham, government policies should result in maximum happiness for the majority of the population. A follower of a tradition that rejects abstract values, he stated that happiness should be quantified based on two concrete indicators: pulse measurement and money.

Fechner is one of the key figures in the development of what we now know as psychology. According to his psychophysical theory, the human being must be understood as the balance between body and mind. In his studies, Fechner looked for ways to quantify the mind through physical signals.

Both aimed to transform subjective experiences into comparable objects. As highlighted by Davies, the line of thought of these intellectuals discards language as an appropriate way of communicating feelings and desires.

Overview: The price of pleasure

In the second chapter of the book "The Happiness Industry", the author William Davies calls into question the reliability of money as a way of representing our feelings. He demonstrates that studies of human subjectivity have always been linked to a search for increased productivity.

Money has two contradictory functions: to contain a certain value and to be a means of exchange. The history of the liberal economy is guided by the commitment to deal with the bipolar character of money. The solution offered by economists is the abstract idea of "value".

William S. Jevons contributed to this story with a "value" theory that correlates pleasure and money, based on Bentham's assumptions. Since then, subjectivity and its interaction with the market have become central to the economy and subsequently expanded to other social institutions.

After the 1930s there was a gap between psychology and economics. From the 1990s, there was a resumption of the relationship between the two disciplines, in order to recover the importance of the economy. Consequently, the moral authority of money.

Overview: The feeling of buying

Since the late 1990s, market researchers have become increasingly obsessed with physical indicators of our consumption preferences. The third chapter focuses on the instrumentalization of psychology by professionals in advertising.

Wilhelm Wundt was responsible for making psychology an autonomous discipline, emancipated from physiology and philosophy. His studies provided the basis for the development of American psychologists, who approached him from a perspective that rejected metaphysical questions.

In the hands of John B. Watson, psychology has become an efficient tool for manipulation. He is the founder of "behaviorism", an extremely scientific aspect of psychology that aims to explain the secrets of human behavior as a result of conditioning. The patient's opinion is irrelevant.

Behaviorism is capable of producing advertisements that target consumers' subjectivity. However, as demonstrated by author William Davies in his book, "The Happiness Industry", it is inefficient in identifying people's desires and requires the support of market research.

From this union, political ideals are converted into consumption.

In this chapter of the book "The Happiness Industry", the author William Davies discusses the productivity optimization systems that have developed in the history of the industry and its reflexes on the behavior of workers. Here two figures stand out: Frederick W. Taylor and Elton Mayo.

Taylorism is a system based on methodical analysis of the production chain, the physical conditions of workers and the work itself. It consists of extracting maximum production with minimum resources, through the rationalized division of labor. It is a system that causes great unhappiness to workers.

Elton Mayo identified in his research that well-being is a factor that interferes with productivity. Following its conception, management has become a social and psychological function.

As the therapeutic management proposed by Mayo gained space, resistance to work began to manifest itself in the form of physical problems.

Davies says a sophisticated resumption of Taylorism is underway. New technologies monitor our physical and mental performance. The rise of a new ideal of human behavior is perceived, in which work, health and happiness become indiscernible. In this context, happiness is a resource to be explored.

Overview: The crisis of authority

The quantification of happiness has been assimilated by a line of thought that has dominated society since the 1980s: Neoliberalism.

The 1960s saw a proliferation of ideas characterized by profound relativism, which called into question the legitimacy of traditional authorities.

The book, "The Happiness Industry", explains that this context of excessive democracy and cultural pluralism made plausible a resumption of ideas similar to Bentham's utilitarian proposal.

According to the author William Davies, two intellectual strands gained strength in this period:

With the support of the pharmaceutical industry, the development of medications for the treatment of mental illnesses was intensified. Sadness is no longer a symptom but a problem to be dealt with.

In the sixth chapter of the book "The Happiness Industry", the author William Davies analyzes the current form of Capitalism, characterized by modern companies such as Uber and Airbnb, and advertisements that penetrate the intimacy of consumers, in order to build customer loyalty.

Contrary to economists' assumptions, it was found that altruism influences more than monetary calculation in our decision-making. In this way, it is more effective to appeal to the individual's sense of morality and social identity than his particular interests.

Following this discovery, the market rejects its old form, presenting itself as a social phenomenon. Its monetary character is concealed. The author calls this process "neoliberal socialism": sharing is better than selling, as long as it does not interfere with the logic of Capital.

Davies notes that this new guise of Capitalism is possible thanks to the digitalization of social relations. Issues of political, social and economic origin are offered individual solutions that result in a cycle of dissatisfaction that drives consumerism.

Overview: Living in a laboratory

Currently, it is said that the bases are established to unveil the secrets of human subjectivity. Author William Davies points to three factors that led to this resumption of this behaviorist optimism:

In the current context, of the dissolution of political, technological and cultural limits for psychological monitoring, subjective states have become quantifiable objects. The challenge for researchers is to interpret massive amounts of data.

The book "The Happiness Industry" clarifies that it is necessary to question whether this technology really is the ideal way to guarantee the well-being of the population. The monitoring, management, and control of our emotions are so successful that it neutralizes alternative forms of political and economic representation.

In the final chapter of the book "The Happiness Industry", the author William Davies states that the way we treat unhappiness in society is the result of a political association of psychology that serves the ruling classes.

This ideology operates in a double way, through complex technological devices that collect data and produce an objective formula of happiness, while a self-management narrative guides ordinary citizens. A discussion about the efficiency of this system becomes impossible.

The treatment of the mind as an independent entity that requires monitoring and repair is a symptom of the culture itself that produces unhappiness. The impotence of individuals is an integral part of the emergence of problems such as anxiety and depression and is rooted in social, political, and economic issues.

Davies concludes his ideas with some thoughts that can build an alternative to the current system.

In order to resolve the supposed happiness crisis that plagues today's society, a restructuring of the institutions that compose it is essential. Finally, and not least, that people are and feel heard.

In the book "Ikigai", the author Ken Mogi tells that the word ikigai is of Japanese origin and means, in free translation, "reason for living". He says that everyone has an Ikigai, just find it, and defines the 5 pillars for that, which are:

In "Factfulness" you will refute the worldviews you had until today, starting to look at a situation from two sides without generalizations. After the teachings of Hans, Ola, and Anna Rosling, you will come out more critical to analyze world situations and conflicts, realizing that things are not always as TV presents us.

Finally, for you who are the leader, in "The Servant", written by author James C. Hunter, you will learn about the concept of servant leadership with the story of John Daily, a boss who aims to transform his situation to have a fuller life, learning the principles and fundamentals of a good leader.

As you go through the pages, you will have great lessons on how to make your leadership motivating when you find a purpose.

"The Happiness Industry" shows that the widespread unhappiness of contemporary society stems from the lack of resolution of the inequality generated by political, economic and social institutions.

According to author William Davies, it is essential that well-being is an end, not a means. And for that, people need to be heard. In this sense, you can adopt a cooperative structure in your business, in which everyone feels represented.

Did you like this summary of the book "The Happiness Industry"?

How do you think we can contribute to the well-being of society? Don't forget to leave your feedback in the comments and rate this PocketBook! 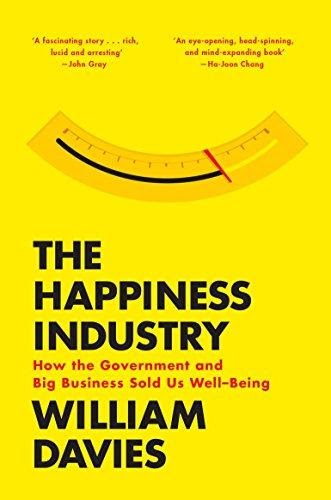