Want to know how liberalism and division of labor act crucially in the economy? Find out the origins of these concepts and their connection with commerce and finances in this summary!

Have you ever imagined how the division of labor emerged in the industrial system? Something that today we commonly see in small and big companies, is based on a lot of philosophy and economy. To bring all those concepts together, the author Adam Smith uses "the invisible hand" metaphor.

In the book, the idea of division of labor is connected to self-interest of individuals, explaining the concepts of mercantilism with the arrival of the Industrial Revolution.

In this summary we will explain each of the six chapters that compose the book, including the guidelines of a liberalism model, an economic theory, which the author judge as a benefit to the state and society.

Got interested in this work from one of the most renowned philosopher and economist in the world? So continue reading and appreciate the liberalism proposed by Adam Smith!

About the book "The Invisible Hand"

The book "The Invisible Hand", by the economist Adam Smith, was published in 2013, it consists of 6 chapters that have been extracted from the famous author's book: "The Wealth Of Nations" (1776). Totalizing 128 pages to read.

Throughout these 6 chapters, Smith discusses the nature of commercial and financial exchanges, suggesting guidelines in the liberalism vision which, according to him, are beneficial to the development of state and society.

Besides that, the author explains the free market behavior and introduces the term "the invisible hand", which is the book's name. That term would be one natural intervention which guarantee the balance, contributing to the society's growth through the self-interest of individuals.

About the author Adam Smith

Adam Smith was a Scottish economist and philosopher born in 1723. It was from his ideas in these areas that economy started to be recognized as a science.

The author became very well known in the edge of the Industrial Revolution (1776), with the publishing of the book "The Wealth of Nations", which was used as a base for the industrial capitalism expansion.

No wonder that, in 2007, the British Bank had put into circulation a new series of 20 pounds banknotes stamped with the image of Adam Smith, getting next to names like Shakespeare, Darwin and Newton.

In "The Invisible Hand", the author Adam Smith addresses the bases and concepts linked to the mercantile system, showing us the guidelines about how the liberalism fits in this context.

Furthermore, with all the knowledge that the book offers, it allows us to do an inquiry about the nature and reflect about the economic systems that we have today, enabling an opinion formation about what we judge right and wrong.

If you want to learn more about this ideology and the benefits that liberalism, according to this economy genius, can generate in the industrial system, this book is for you!

Main ideas of the book "The Invisible Hand"

Download the "The Invisible Hand" Book Summary in PDF for free

The author Adam Smith starts his book "The Invisible Hand" explaining the division of labor concept, and for that, he gives some examples from his time (1776) in order to show how important this principle was for increasing of industrial productivity.

One of them is with a pin factory from his time, where 10 people divided in production sectors could produce up to 4.800 pins per day, while if each of these employees tried to make up one entire pin, they could hardly produce 20 pins in one day.

To explain this increase in productivity, the author uses 3 key factors:

This last topic is justified by the following statement contained in the text:

"Man are much more likely to discover easier and readier methods of attaining any object, when the hole attention of their minds is directed towards that single object, than when it is dissipated among a great variety of things."

The chapter ends showing the huge dependence chain between the industries, that was formed from the division of labor, making each factory produce something that meets the need of the other, and so on.

Overview: The Division of Labor Principle

In this section of the book "The Invisible Hand", it is explained that the division of labor arose from the self-interest of individual in acquiring something of interest, not from their benevolence in helping others.

The author Adam Smith explains it saying that people have the following thought:

"Give what I want, then I give you what you need."

This phrase expose the necessity in show the benefits to the product holder to make the transaction happen.

And this trade system by interest provided us with the beginning of the division of labor, where each individual produce something interesting for other, to convince them to trade.

Money has 2 meanings, one as currency trading and other as value of things.

On that basis, the author Adam Smith shows that countries from his time, such as Spain, started to accumulate gold as a synonym of state wealth, giving initiatives for that.

The biggest advantage of gold was that, different from a vast amount of products, its transport was easy, resulting in a low market value fluctuation.

Among the initiatives mentioned, stimulating of export and restricting to import are the most relevant, export being important for other countries owe you money, offering benefits to the merchants and to the state.

On the other hand, the excessive importation can result in troubles, like the currency devaluation.

Contextualizing with his time, Adam Smith gives a British example, which restricted imports of live cattle and meat as a measure to support and strengthen the domestic market.

According to the book "The Invisible Hand":

This statement explains very well the relationship between money and goods, in other words, money always is used to obtain something, but we do not buy goods looking forward to earning more money with that, such as the case of own consumption.

Overview: Restrictions on the Import of Goods

In this chapter, the liberalism, ideology that guides the entire book, is unraveled and exemplified.

Like commented before, restrictions on the import arose to keep money inside the country, providing an increasing in the capital of society and consequently increasing factories sizes and states economy.

However, for the author Adam Smith, the state intervention is not necessary in that scope, and to explain it, he uses the expression which is the book title: there is an "invisible hand" that produces an outcome that is not part of your intention.

To understand better, Smith says that people naturally tend to invest their money in locals near where they live, this is because they have more knowledge about the community and laws, what gives more confidence to the investor. People only cares about their own security and gain.

Said that, it is clear how unnecessary interventionism is in this aspect. Promoting a strong idea of liberalism, since people naturally leaning to this kind of action, and consequently, by the concept of invisible hand, end up benefiting all the society through their own interests.

Moreover, the author uses a plenty of phrases to sustain the liberalism, such as:

"To prohibit, by a perpetual law, by importation of foreign corn and cattle, is in reality to enact, that the population and industry of the country shall, at no time, exceed what the rude produce of its own soil can maintain."

The chapter ends up with the problematic of taxing essentials products, what increases the cost of life, and inevitably, increases the labor cost, explaining by this way the limits to the free importation, and when it is appropriate to restore this type of trade.

Through the comprehension about the natural course of money between the importations and exportation, the author Adam Smith explain that many times it is irrational and unnecessary restrictions to extra ordinaries importations to countries that are commercially disadvantaged.

Continuing with the idea of liberalism, in the book "The Invisible Hand" is shown that sometimes a free commerce, without pressure, increases their population annual recipe much more when compared with locals that receive subsidies from the state.

The commerce should be a factor of friendship and union, but it ended up becoming the most fertile source of disagreement and animosity. This argument is concluded by the following statement from the book:

"The violence and injustice of the rulers of the mankind is an ancient evil, for which, I am afraid, the nature of human affairs can scarce admit of a remedy."

However, among the money dispute, it is important to say that our neighbors richness can be advantageous for trade, but dangerous too, because a rich client is good, but a rich competitor not so much.

This trade competition is only beneficial for the society, because it generates lower prices and bigger variety of goods. Another highlight is the importance of the local richness, because where there is no money flux, there is nothing to aggregate.

There are two types of expenses, the barren and unproductive, and the productive expend.

To explain better this 2 concepts, the author Adam Smith uses the agricultural system of his time, where the generated product is first used for labor living (companies expend), and then, the surplus production is sold, increasing the capital.

In other words, the labor expenses are considered productive, because in addition to use the own product to save on expenses, all the rest is profit.

By this way, is produced much more than only replaced, increasing the recipe and the society richness fastly, when compared with manufacturing industries, where the expenses are considered unproductive.

It happens because the labor has to spend their money, that was earned producing some goods, with essential products for living. So, their capital will only increase if they reduce some expenses and save money, not being natural as the agricultural system.

But both have their importance, because the agricultural system produces the base for the labor living, which, in turn, produces the necessary tools for the farmers dedicate all their time in the production.

Like this, Adam Smith again exalts in his book "The Invisible Hand" the guidelines of liberalism, explaining how the taxing and prohibition to the exportation can be terrible for the society economy.

Examples of that are the 2 factors generated by creating a domestic market monopoly:

What do others authors say about it?

In your book "Why the Rich are Getting Richer", Robert Kiyosaki explains how the riches uses the debts, market crisis and taxes to earn more money.

In Sam Walton's and John Huey's book: "Sam Walton: Made in America", it is explained about the 3 main factors that enable the companies' success.

In "Misbehaving", by Richard H. Thaler, one of the topics is the impact of the individual behavior in economy.

With this summary you could have an idea of how rich this book's subject is, could not you? Here are some suggestions that can help you a lot in the future:

Did you like this summary of the book "The Invisible Hand"?

We want to know your opinion, after all it is crucial for us. Leave in the comments below your feedback and rate this summary!

Besides that, if you want to know more details about this book, just click in the image below: 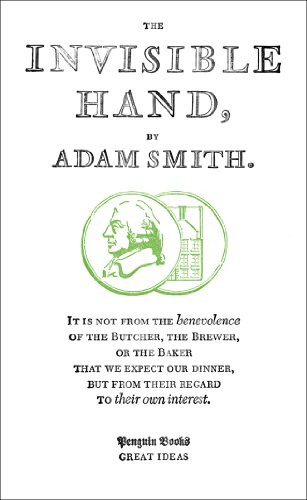