The Power of Habit - Charles Duhigg

Do you want to apply habits to achieve your goals? See how habits emerge, how they change, and the science behind your practice.

Have you ever wondered why some people can adopt a healthier lifestyle or achieve professional achievements, while others fail?

Successful people are those who have learned to control and change their habits.

By analyzing how undesirable habits - eating excessively, drinking excessively, or smoking - operate in a cycle of satisfying desires, people who want to change can control habits that previously controlled them.

With skill and cunning, Duhigg exposes a new understanding of human nature and its potential for transformation.

Want to know how? Read with us this summary of the book "The Power of Habit".

The book "The Power of Habit"

The book "The Power of Habit" shows why some companies and people have so much sacrifice in changing habits, while others have such ease.

Changing habits can generate billions of dollars and represent the difference between succeeding or failing and even between life and death. In addition, it shows how the habit was essential to the success of Starbucks director, Howard Schultz, and hero Martin Luther King.

Who is Charles Duhigg?

Charles Duhigg is an investigative reporter for The New York Times.

He was the author and collaborator of the following series of articles: Golden Opportunities (this was the investigation of companies that take advantage of the elderly), The Reckoning (a study on the causes and consequences of the economic crisis), and Toxic Waters (on the pollution of waters in the US and the government's reaction).

For his work, Duhigg received the awards: National Academies of Sciences, National Journalism, George Polk, Gerald Loeb, among others.

If you want to understand how to apply habits to achieve these goals, the ideas shared here are for you.

What are the key points of the book "The Power of Habit"?

The habits of individuals

A habit is an activity that a person intentionally decides to perform once and continues doing without having to focus on it anymore because it performs with a certain frequency.

Habits arise because the brain constantly looks for ways to save effort. This is because habits decrease the effort to which our minds are subjected at the moment when we perform a certain task.

An example of this is learning to drive. At first, it may seem difficult, but over time, the routine becomes automatic, that is, it requires less mental effort.

The habit process consists of a three-phase loop. According to Charles Duhigg:

"First there is a cue, a stimulus that sends your brain into automatic mode, and indicates which habit it should use. Then there is the routine, which can be physical, mental, or emotional. Finally, there is a reward, which helps your brain to know if it is worth memorizing this specific loop for the future".

When the cue and reward connect, the brain develops a strong sense of expectation, leading to a desire and the birth of a habit.

Unfortunately, the brain does not judge whether the new habit is beneficial or harmful, so bad habits are also ingrained. However, you can change destructive habits and adopt new and positive ones by understanding and managing the information retrieval cycle.

Focus on your cues and rewards and change your routine to thwart the desire.

The golden rule of habit change

Tony Dungy, Florida football coach, had the belief that the secret to victory was to change the habits of the players. He intended to make them stop making several decisions in the course of the game. His desire was for players to respond automatically, out of habit.

According to Dungy, "Champions do not do extraordinary things. They do common things, but too fast for the opponent to react".

However, the coach's idea was not to create new habits, just change the old habits of the players. Dungy's strategy was to offer the same cue and the same reward, he just wanted to change the routine.

If you use the same cue and offer the same reward, it is possible to change the routine and change the habit.

Dungy made the Bucs one of the most successful teams in the league. He became the only coach to reach the finals ten years in a row, and one of the most recognized figures in professional football.

It is important to highlight that, although the process of changing habits is easy to expose, it does not mean that it is simple to perform.

It is easy to suggest that smoking, alcoholism, and compulsive eating can be resolved effortlessly. Real change requires dedication and self-understanding of what encourages your habit.

No one will stop smoking because they know their own loop, but understanding it will provide ways to plan how to change their behavior.

Suppose you want to stop eating late at work. What reward are you looking for when you do this? End your hunger or cease boredom? If you come to get rid of boredom, it is possible to find another routine that provides the same reward, if you give three minutes of the internet for example.

Remember that if you can recognize cues and rewards, you will be able to change the routine.

The habits of successful organizations

In this part of the book "The Power of Habit", the author cites examples of habits of successful organizations and explains how these organizations did to change their habits.

Angular habits, or Paul O'Neill's ballad: which habits matter most

When Paul O'Neill became CEO of the Aluminium Company of America (Alcoa), he surprised shareholders by focusing on employee safety.

In his inauguration speech, O'Neill said that several Alcoa employees suffered injuries so severe that they missed a day's work. He had a mission to make Alcoa the safest company in the United States. Its goal was "zero accident rate".

Less than a year later, the new CEO was able to increase the company's revenue by more than five times, in addition to making it one of the safest companies in the world.

The new director managed to change Alcoa by attacking a single habit, and then the changes spread throughout the company.

According to O'Neill: "I knew I needed to change it, but you can't tell people to change. This is not how our mind works. So I decided it was better to focus on one thing. If I could start by breaking habits related to a single thing, it would spread throughout the company".

We have already seen how habits work, how they can be changed or created.

But where should a suitor reformer begin? The answer is to understand angular habits. The most important habits are those that, when changing, release, and renew other patterns.

However, identifying angular habits is a complicated job, it is necessary to know where to look and what characteristics to look for. But as O'Neill and several others have discovered, bridging the gap between understanding these concepts and putting them into practice requires some ingenuity.

Starbucks and the habit of success: when willpower becomes automatic

In the case of Starbucks, the rules for employees inculcate the concept of willpower, which the survey identifies as the prominent habit that determines personal success.

Just as academics achieve positive results in other areas of their lives when they practice academic self-discipline, Starbucks employees have improved their lives and careers after learning the willpower to be joyful, regardless of what happens in their working days.

The power of a crisis: how leaders create habits through chance and intention

Good organizational habits can grow out of crises. At Rhode Island Hospital, an error in the operating room (OR) showed that a change of habit was necessary.

The atmosphere between nurses and doctors was bad. Some doctors were authoritarian and wanted the procedures to be done the way they wanted without following safety protocols.

Rivalry and fear became a habit and caused the death of a man due to medical error and from there, changes in habits were made that changed the culture of that hospital.

The habits of societies

The author closes the book "The Power of Habit" explaining how changing habits influence society and the extent to which we are responsible for them.

Through the boycott of buses in Montgomery, Alabama, Duhigg explains how changing habits influences society and how responsible we are.

This boycott arose in part from social habits, which are capable of changing the world through the unity of people.

Seamstress Rosa Parks was deeply connected to her community: she had strong ties to family, friends, and weak ties to seamstress work and church acquaintances. When the police arrested her for refusing to leave her bus seat to a white person, the black community rebelled.

Reverend Martin Luther King Jr. and other leaders created "a sense of ownership" in their cause and mobilized black residents to fight for civil rights.

He created small groups that met outside of Sunday services. People read and studied the Bible, discussing the difficulties they faced every day. In this way, they supported each other.

The weak ties of the main congregation branched out to mini-groups with strong ties that built "leaders with self-direction", a phenomenon of social habits.

Are we responsible for our habits?

Research suggests that if the brain has no chance to intercede intentionally, the answer is that people are not responsible for their actions.

So why was a man who, while sleeping, killed his wife, acquitted, while a woman addicted to games did not?

We usually assume that people are responsible for gaming-related habits. And indeed, they are. That's because the person chose to play, chose to repeat the routine, until it reached the point where it became a habit, becoming addicted.

The sleeping man who killed his wife in no time decided to do that. He acted without conscience.

With determination and belief, people can change their habits if they can examine and analyze them to uncover understandable clues, routines, and rewards.

In the book "Atomic Habits", James Clear explains how small changes (atomic habits) can generate great results. According to him, habits are the compound interest in personal improvement. Improving 1% each day generates a giant change at the end of the journey.

For the author of "Hooked", Nir Eyal, you have habitual behaviors that you carry out practically without thinking, and when the use of a product or service - like smartphone or Twitter - becomes a habit, the company behind it can celebrate.

Finally, in "Awaken the Giant Within", author Tony Robbins, suggests that if you want to break a particular habit, an efficient method of doing this is to associate this behavior that you want to exterminate with some kind of pain.

So, how can I develop better habits?

There is no magic formula that will automatically change your habits, but with time and effort habits can be shaped.

We will see some steps covered in the summary of the book "The Power of Habit" that will help in this process:

Did you like this summary of the book "The Power Of Habit"?

What did you think of Charles Duhigg's work, "The Power of Habit"? Leave your feedback, so we know your opinion and always offer the best for you!

If you want to go deeper into the subject, you can enjoy and purchase the book by clicking on the image below: 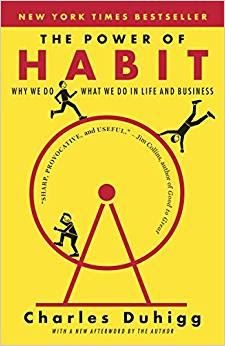