Do you want to understand leadership strategies and tips from Niccolo Macchiavelli and apply the concepts these days? This book summary is for you!

Strategy Studies have permeated our society for centuries, because of that a lot of authors have written about it. From these books, we can learn about these millennial thoughts and reflect: "How to apply these teachings in our daily lives?"

The purpose of this summary is exactly this!

Learn here about Machiavelli's work, passing through his thoughts and reflections and, at the end, a possibility to apply them in your company, in your professional life and even in your personal life.

So let's go, because we have so much to learn!

About the book "The Prince"

Originally published in 1532, the book "The Prince" is divided into 26 chapters that bring the analyzes of Niccolo Machiavelli about what the state was like at that time and how a prince should behave to achieve success and stay in power.

Being an essentially political work, it continues to the present day in the bookstores, being translated into new languages and analyzed, because its teachings, for the most part, are still valid.

About the author Niccolò Machiavelli

Born in Florence, Italy, in 1469, Niccolò Machiavelli was a State Secretary, having contact with merchants, politicians, heads of state, church members and other important people, which contributed to the development of his ideas.

However, in 1513, the Medici, a famous family that had previously occupied power in Florence, overthrows the Republic and returns to power. Thus, Machiavelli was estranged from his role in government, and then he was able to devote himself to his political studies and power, bringing reflections on the performance of the State.

In 1527, Machiavelli died poorly and without the well-deserved recognition, which was only obtained from the publication of "The Prince" in 1532.

The teachings of Machiavelli are indicated for those who want to understand a little more about strategy and practices of leadership and, from these studies, apply the concepts nowadays.

Main ideas of the book "The Prince"

So let's get down to business?

Download the "The Prince" Book Summary in PDF for free

Overview: About Territories and Power

The first points to be addressed by the book "The Prince" reflect the importance of the domination of territories and the perpetuation of power in those regions.

Many conquerors have already faced challenges and dominated cities easily, but they have been unsuccessful in maintaining control over those territories, either through lack of control of the population, lack of leaders to control the region or lack of adequate military power.

At the time he was writing the book, Italy was composed by principalities, that is, each city was sovereign and had its own government, as well as its own prince.

So, Macchiavelli says that is necessary that the leader understands that each principality, has distinct characteristics and, each one deserves to be dominated in a different way, considering the laws already existing in the place, adding new laws or adapting them according to the characteristics of the population.

It should also be understood that each place has a distinct mode of governing, which also needs to be taken into account. Thus, it will be easy not only to dominate new principalities, but to control them properly and protractedly.

The author also says that the prince must pursue his goals at any cost, no matter what will be done. It is necessary that the main objective be the common good, but to achieve it, the prince must use all the devices at his disposal.

Niccolo even cites violent acts as a way to achieve your goals. But as long as the goal is achieved, all possible methods for this must be considered. And thus came the thought that gave rise to the famous phrase:

NOTE: It is worth mentioning that this phrase was not said by Machiavelli, but it sums up the thought expressed in this chapter.

Overview: About Arms and Armies

Machiavelli points out that a consolidate state needs good laws and good weapons. The laws allow an organization and provide a code which the people must follow, since the arms are essential for the defense of the territory and to maintain the sovereignty.

In his studies, the author shows us the different types of weapons and the pros and cons of each one, since each of them should be used in a different situation, bringing different results.

But the most important thing is to have a well-structured army, because it is your troops who are responsible for defending the city or attacking new territories.

So it is up to the prince, the officer in charge of the army, to strengthen the troops, because the kingdom can not depend on mercenary troops or auxiliary troops (allied kingdoms), since they have distinct interests and are not fully committed to the cause.

A principality must depend on its own troops, otherwise in the author's view, it is subject to luck, without heroism to defend it in adversity.

Overview: About being feared or beloved

In the Part III, Machiavelli shows which features a prince should have to stay in power and, as we shall see, brings his famous question:

"Is it better to be feared or loved?"

The first and main point is the responsibility of the prince as a strategist chief and leader of an army.

The author explains that a prince should see the war as his goal, know the rules and develop discipline, because it is up to the ruler to be the guide in these situations, to keep the troops organized and exercised, to know all of its territory and how to defend it, seeking to achieve victory.

A leader should study illustrious people in order to be inspired and develop, being always prepared to solve problems and be the example to be followed.

At that point, Machiavelli deals with the values of a prince, concluding that the ideal would be to possess all values. However, this is impossible, so one must develop the values that will allow the leader to remain in power.

By developing these values, the prince must rely only on his virtues and attributes, making his own knowledge-based decisions, as the only truly trusted ally is yourself.

A good ruler must strive for balance. It is up to the leader to balance the level of freedom and rigidity, generosity and avarice, cruelty and mercy, knowing that all his attitudes will reflect on the government and the thinking of the population on his leadership.

Thus, the author defines that by making these combinations, the most important thing is to avoid the hatred of the people, as it is hatred that promotes revolts and overthrows rulers.

Parallel to this, arises the great and famous doubt about being feared or loved. Machiavelli defines that the ideal would be to be both, but they are opposing characteristics that do not complement each other.

So there is a definition that it is better to be feared, because love is fickle and unstable, for example, the people will love you until they stop doing what interests them. Fear is constant, which will bring respect and it will favor the perpetuation of power.

A prince, characterized by animal nature, must be a mixture of foxes and lions, because the lion has the brute strength to fight wolves, but he has no insight in escaping from the traps.

However, the fox knows the traps, but does not have the strength to fight with wolves. That is, a prince needs to be characterized by all the best features to overcome obstacles.

In the book "The Art of War", the importance of information is constantly addressed by author Sun Tzu, as well as the relevance of having this knowledge in advance, promoting a competitive advantage for an army.

Miyamoto Musashi, author of the "Book of Five Rings" clarifies the importance of using the tools. A samurai must know the instruments in disposal and know how to use them, knowing the advantages and disadvantages of each one.

Finally, the book "The Blue Ocean Strategy" brings a new concept in strategy to obtain prominence in the market. This innovation is based on exploring market opportunities in which there are no competitors yet, named by the author of "blue oceans". In this way, there is a separation of opponents and a differentiated form of growth.

After the main teachings, we can establish a relation of the studies of Niccholi Machiavelli with our reality of today.

Of course, some ideas are not applicable, as society has changed a lot and some things do not fit anymore, but we can translate these reflections into the world in which we live.

For this, let's take as an example that you have a company and, from these studies, you need to implement some lessons in the daily routine. Let's go?

Did you like this summary of the book "The Prince"?

Did you enjoy this content? Give your feedback int he comments, you opinion is very important to us!

And if you want to know more details about Machiavelli's thinking, you can get the book by clicking on the image below: 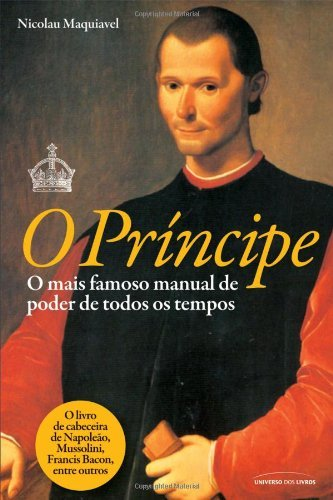