The Rise of The Network Society - Manuel Castells

Understand the social and economic dynamics in the Information Age, based on the Digital Revolution that began in the 20th century.

We live in the Information Age. But how can digital transformation impact the economic, social and cultural dynamics of different types of society around the world?

Published amid the growth of the “dot-com” bubble, the book “The Rise of the Network Society” seeks to explain the main effects caused by information technology in the contemporary world.

In addition, it highlights how information, money and communication flows are able to regulate, at the same time, production and demand, directly influencing people's lives.

To understand more about this topic so relevant to modern society, keep reading this summary!

About the book “The Rise of the Network Society”

Originally released in 1996, it is the first volume of the trilogy “The Information Age: Economy, Society and Culture”. The book has several revised and updated versions. The latest edition contains 656 pages.

About the author Manuel Castells

His main work is the trilogy “The Information Age: Economy, Society and Culture”, which has been translated into over 20 languages. Castells is one of the most cited scholars in the fields of communication and social sciences.

“The Rise of the Network Society” is essential reading for people who seek to understand the impacts of technology on modern society, as well as helping to identify the transformations related to technological advancement within each reality.

Main ideas of the book “The Rise of the Network Society”

In this summary of the book “The Rise of the Network Society”, we are going to talk about the author's views on the malaise of postmodernity, as well as explaining his analysis of the impacts on culture, nature and the perception of time.

Initially, Castells defines technology as the use of scientific knowledge to facilitate human life, creating elements that are reliable and scalable.

From the advances in all these areas, a digital world has developed, because, unlike other industrial revolutions, the core of this transformation passes through information, processing and communication technologies.

The researcher draws a parallel between the role of technology in the current revolution and the development of new energy sources in previous industrial revolutions, which transformed and impacted society as a whole.

However, unlike the old revolutions, digital transformation took place in a globalized way and at high speed, featuring the immediate application of the technology generated, capable of connecting the world from the 70's onwards.

Castells reports that the birthplace of this revolution was Silicon Valley, a region south of San Francisco, California.

The development in this area was due to the convergence of several factors, such as the presence of talented engineers and scientists graduated from nearby universities, the availability of public and private resources and the formation of a network of venture capital companies.

With this in mind, the author made several trips around the world and found that the spatial concentration of research centers, educational institutions and suppliers of goods and services tends to generate large circles of innovation and technology development.

In this way, it appears that large metropolises offer all the necessary elements for technological evolution, whether in the United States, Europe, Asia or even in Latin America.

The author defines the new economy, one established from technological advances, as global, informational and networked.

It is globalized because the vast majority of productive activities and their components (capital, labor, raw materials, administration, information, technology and markets) are organized on a worldwide scale.

It is characterized as informational because the competitiveness of economic agents depends on the ability to efficiently generate, process, analyze and distribute information.

Finally, the economy is based on a global network of interactions between diverse business networks.

In this way, it is easy to see that information technology provided the foundations for the creation of this new economy.

Next, the author explains that, in the long run, productivity is the source of the wealth of nations. Technological advances, both in production and management, are the main factors driving productivity.

Therefore, Castells concludes that the expansion of the productive base and markets must be accompanied by the growth and globalization of specialized workforce.

Furthermore, he believes that, in the course of the 21st century, the biology revolution will join the information technology sector in creating new companies, especially in the health care and agriculture sector.

At the end of the chapter, the writer points out that the new economy also has flaws, since its expansion is very uneven around the world, and systemic volatility opens space for financial crises with devastating effects.

In this chapter, the author discusses the organizational transformations that took place from the 1970s onwards, which took place as information technology spread.

He explains that these changes were aimed at dealing with the uncertainty caused by the accelerated pace of changes in the company's economic, institutional and technological environment, which increased flexibility in production, management and marketing.

Organizational changes have redefined work processes and practices. An example is the development of the lean production model, which aims at automation, cost reduction, suppression of managerial layers and waste elimination.

This allowed establishing data-based methods and processes. Knowledge management and information processing are critical to the performance of organizations operating in the new economy.

In this context, global production and distribution networks emerged, with companies that outsource most of their production activities, according to the organization's strategic interests.

These companies are known as “horizontal companies”, and have the following characteristics:

As an example of this transformation, Castells cites Cisco Systems, a California-based company that provides solutions for enterprise networks.

In the late 1990s, the company had an aggressive strategy of acquiring smaller and promising companies, all in the technology sector. The objective was to be able to apply to itself the network logic it sold to its customers.

In this way, it was able to organize, through the internet, all relationships with customers, suppliers, partners and employees, reducing its own manufacturing.

In 1999, 83% of orders were received online, and 80% of customer service was done in the same way. As a result, it is estimated that Cisco saved approximately US$500 million during the year.

The transformation of work and the labor market

The labor process is the core of the social structure. Therefore, the technological adaptation and the relationships involving the work within the network company is the way in which society is affected in this informational paradigm.

The sociologist's approach to occupational structure involves an empirical observation of the evolution of employment in developed countries. This observation identified the following aspects:

Castells also highlights the trends observed in relation to the formation of a global workforce. At the time of the book's release, work was still very limited by institutions, cultures, borders and even xenophobia.

However, as predicted by the author, these factors have decreased over the years and, with the advent of remote work, it is increasingly possible to verify a global workforce.

In this way, the writer emphasizes that information technology is the decisive tool of the work process in the Information Age, because:

The increase in productivity and profitability has occurred, but workers have lost institutional protection and find themselves increasingly dependent on individual negotiations, within an ever-changing labor market.

The laws of human nature promote a division between winners and losers. In this scenario, it was no different: societies are becoming dualized, with a large upper layer and a large lower portion, growing at both ends of the occupational structure.

The culture of real virtuality

In this chapter, the author discusses the formation of a metalanguage that, for the first time, integrates the written, oral and audiovisual modalities of human communication in the same system.

Castells comments that, as culture is mediated and determined by communication, cultures themselves are fundamentally transformed by the new technological system.

With the advent of information technologies, this multimedia communication is capable of shaping the thoughts, behaviors, desires and needs of the different types of existing society.

This radically transforms space and time, the fundamental dimensions of human life. Locations are integrated into functional networks or image collages, while time is erased, since past, present and future can be programmed to interact with each other within the same message.

He defines this liquid modernity as the age of real virtuality: reality itself is entirely captured and immersed in a composition of digital images in a virtual world, in which on-screen appearances become the experience itself.

In 2021, Facebook announced that the company would change its name to Meta, indicating the tech giant’s focus on developing the so-called metaverse, considered the next step in the journey of social connections.

The great Marketing guru, Philip Kotler, also mentions in his book “Marketing 5.0” the suppression of the middle layers of society in different areas, including economic, ideological and professional aspects.

In the book "How to Thrive in the Digital Age", author Tom Chatfield lists the benefits that come from technology in our daily lives, but also warns of the various problems that the misuse and exaggerated use of these devices can bring.

Finally, thinking about digital transformation, the book "Negócios Digitais", by author Alan Pakes, brings important concepts about digital organizations, as well as ways to migrate your company to the digital realm.

Did you like this summary of the book “The Rise of the Network Society”?

What do you think of the author's views on the period of intense and surprising transformations in which we live?

Leave your opinion in the comments, your feedback is very important so that our team can improve more and more the content offered to our dear readers!

And to find out even more about the content, purchase the full version of the book by clicking on the image below: 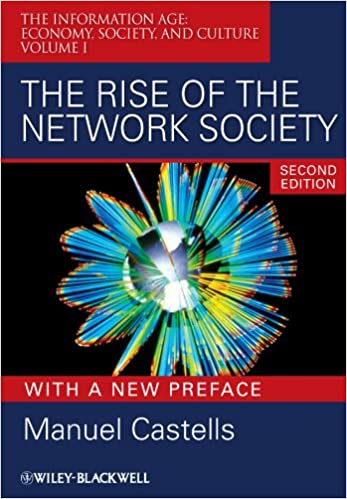