Do you have a product or idea, and do you believe it needs to be publicized, or are you having trouble expanding it? Learn small changes that can spread your idea to a large audience and achieve success.

How to explain why many ideas, products and behaviors spread quickly and become successful, while others do not? According to the author Malcolm Gladwell, this phenomenon is known as "The Tipping Point".

In studying it, Gladwell compared it to a "social epidemic", where news and trends spread like a virus. From there, he teaches how to identify and create stimuli that generate these behaviors and offers strategies for the dissemination of ideas.

Want to know more? Then continue reading this PocketBook and discover this contagion effect!

About the book "The Tipping Point"

Published in 2000, the book "The Tipping Point", written by Malcolm Gladwell, seeks to present the subject of how ideas spread.

The author makes an analysis and presents the trajectory of how things spread and become a "social epidemic". This gives you great concepts and techniques so you can leverage your idea and spread it to a wide audience.

Throughout the work, the content presented is full of real-life stories, interviews and case studies.

About the author Malcolm Gladwell

Malcolm Gladwell was born in England and has a background in journalism. He was a reporter for The Washington Post, where he covered business and science.

In 2005, the renowned Time Magazine named him one of the 100 most influential people.

Malcolm Gladwell has been a columnist for The New Yorker magazine since 1996. He is also the author of the hits "Outliers: The Story of Success" and "Blink: The Power of Thinking Without Thinking". All his published works together have sold more than five million copies.

You who have a product or idea, and believe that it needs to be disseminated or are having difficulty expanding it and bringing it to a wider audience, then the book, "The Tipping Point", is for you.

Plus, the book's content is right for you who want to change your marketing tactics, make your brand better and grow.

Main ideas of the book "The Tipping Point"

Download the "The Tipping Point" Book Summary in PDF for free

After all, what is a Tipping Point? The author Malcolm Gladwell defines it as a trend that is turned into an epidemic and spreads uncontrollably.

According to him, epidemics have three characteristics: they are caused by small things, multiply rapidly and are contagious.

At first, something is shyly spread for some time. It is then fired towards the top, practically in a straight line. This is very common with new technologies.

An example the author uses in his work is about the turning point of crime in the United States. According to him, the number of crimes fell by half and the murders to a third of the numbers registered before.

The highlight of this fact was due to the cleaning of subway graffiti. These graffiti were icons of the ruin of the system.

But when everything was rebuilt and organized, the fight against vandalism was won, causing a direct impact on the safety of people using transport.

Another point cited by the author is about the Pareto Principle. He states that it has a full relationship with epidemics. That is, it is observed that a small group of people are largely responsible for accelerating the mode of transmission of this epidemic.

Thus, Malcolm says that the turning point or so-called "social epidemic" takes three characteristics: the rule of the elect, the setting factor, and the power of context.

According to the book "The Tipping Point", for an idea to become an epidemic, we have to take care of the most important point, the emitter.

They are considered to be those who have a lot of networking and own a very large social network. They have contacts in various areas, making them various sets.

Thus, the author Malcolm Gladwell says that having a large network of contacts is much better than a small group of closer contacts, after all, the larger it is, the greater its ability to spread ideas.

They are represented by those who know a lot about different things and always keep up to date. Experts generally do not have large networks, but are responsible for passing on their knowledge to others on their network.

Most people trust the expert because they know he has unique knowledge. That way, if they recommend a product or service, people will trust them to spread the word and make recommendations.

These are the ones who hold the power of persuasion. Salespeople convey a good idea through developing empathy and connecting with people.

In addition, they are responsible for selling brands, ideas or anything else, causing people to change their perceptions.

It's no use having a good sender if the content is not important, right?

For this, the author Malcolm Gladwell says that the content to be broadcast should be easy to memorize and simple.

According to him, it need not be something ever seen, most often an improvement in small details makes all the difference, especially the way this message is presented.

An example cited in the book "The Tipping Point" is the increase from 3% to 28% of those impacted by tetanus vaccine, the only thing that changed the message content was the insertion of the map of the location of vaccination posts; that is, when content is practical it is easy to remember about it.

Everything so far looks like a famous cake recipe, right? But no, you need to be able to change your attitudes towards the context you are in.

Thus, the context has to contribute to the dissemination. It's like Malcolm Gladwell says, you can't do a Christmas campaign out of season, because it won't be that widespread.

Most of the time, small changes are responsible for initiating major epidemics, and they are sensitive to where they occur. That is if we have a dirty and disorganized environment we send a bad message, allowing new offenders to be authorized.

Finally, the author says that in groups with more than 150 people social cohesion weakens, the ability to agree and uniform actions is reduced, causing the group to be fragmented.

Deepening the Solid Base Law, which advocates the importance of gaining people's trust in order to influence them, the book "How to Win Friends and Influence People" brings a series of teachings on how to excel in personal relationships.

According to Dr. Robert in his book "Influence: Science and Practice", everyone uses to influence and is a target for it. He explains that persuasion practitioners know exactly "what" and "where" they want to go; To do so, they use six psychological principles, addressed in their book, to achieve their goals.

In "Contagious", author Jonah Berger clarifies that mental triggers are meant to allow your brain to function better without information overload.

They serve to link one thing to another, that is, when we talk about a certain thing, we automatically remember another, making that link between them and thereby increasing their persuasive power when negotiating their sales.

For your turning point to occur and to create an epidemic of your ideas, consider the following four items:

Finally, the author Malcolm Gladwell says that you should focus on the people responsible for the "social epidemic", namely the experts, salespeople, and communicators.

Thus, it is a mistake to focus on communication that is broad because communication is confusing; With this, one must carefully test the possibilities.

Did you like this summary of the book "The Tipping Point"?

We hope you enjoyed our summary and are able to disseminate ideas following the teachings of author Malcolm Gladwell. Leave your opinion in the comments, your feedback is very important to us! 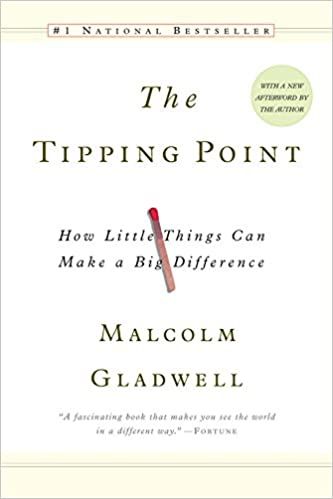