The Wealth of Nations - Adam Smith

What is free trade? How business work they do? This classic of economics that change the way we look at money has the answers!

Basically, Adam Smith, author of the book "The Wealth of Nations", thought that each person should pursue his own interest without the government trying to interfere. Thus, product prices would fall and their quality would increase. This is because the supply of products will always follow demand.

Look at the products you have at home. You will notice that most of them were not made in your country, right?

The reason you purchased them is that they come from the international market, where competition and innovation have made them better and cheaper goods.

Want to know more? So continue reading this PocketBook and learn all about this market model!

The book "The Wealth of Nations"

The Wealth of Nations, released in 1776, is about the thoughts of Adam Smith on how the economy works and how the government should act. Almost 250 years after its release, this classic book remains the basis for the world economy.

In addition to being the founder of economic science, this book has established a sequence of changes in economic policies. Free trade is just one example.

What is free trade? Well, Adam Smith will go through the whole book explaining just that. The book is composed of 142 pages and 10 chapters.

Who was Adam Smith?

Adam Smith, born in 1723 in Scotland, was a philosopher and one of the greatest scholars of the Classical Economy. Considered by many as the Father of Modern Economics.

His works would be so influential to policymakers and industrialists in Britain that started the discussion to cause the creation of a free market, and today he's considered one or if not the greatest thinker economic liberalism

Being also the author of renowned books such as "Theory of Moral Sentiments", "The Invisible Hand" and "The Wealth of Nations."

Free trade allowed people from many parts of the globe to gather their talent and work to create products that centuries ago were unimaginable. Just pay attention to the number of people who own smartphones.

But is free trade as good as people say? After all, several companies changed their location, they went in search of cheaper labor and this caused many people to lose their jobs.

As you read this book, you will have much more knowledge about what is free trade and you can also decide for yourself what you think about the subject.

What are the key points of the book "The Wealth of Nations"?

"From the Division of Labor"

To illustrate the idea of how "division of labor" works, Smith gives the example of pin-making.

Normally, a beginner could make one acceptable pin per day, but when we have someone stretching a wire, another cutting, another pointing, in the end, we will have thousands of pins per day.

According to "The Wealth of Nations", dividing work into smaller parts makes productivity much greater than if only one person did the full work. This is how the advanced manufacturing system works.

"From the Principle that leads to the Division of Labor"

For Smith, it is critical that a nation has open trade with other countries. This is because any producer usually needs several other products for himself. For example, a pants manufacturer needs more than pants to survive.

In other words, a particular manufacturer will produce more goods, so that he can exchange for other products you need.

"The Division of Labor is Limited by Market Extension"

Having the division of labor and the exchange of products and services will only exist as one limitation, Adam Smith calls it "market extension". According to "The Wealth of Nations" this "extension of the market" is simply having to whom to sell or exchange your products or services.

For example, a manufacturer of jackets trading in a seaside town. In this case, he must move to a cold-weather city where his "market reach" will be much greater.

"From the Origin and Use of Money"

"The Wealth of Nations" establishes that the origin of money came from the need to exchange products. Of course, how could you acquire the desired product if there were no one to trade with? Let's return to the example of the seller of coats.

Suppose he wants to exchange his products for potatoes, but the potato vendor does not want to buy coats.

That is why something is needed that allows the manufacturer of coats to sell their products to people who do not want coats. The money came to solve this exchange of products.

Smith points out that money is worthless. It is valuable only to the extent that you can buy "work".

The price of each product is defined by the amount of labor necessary to produce it. This value does not fluctuate, it is fixed since you always need the same amount of labor to create the product. This is Adam Smith's definition of "real price."

Now "nominal price", on the other hand, is variable. It is linked to how much we are willing to pay for a certain products. As an example, we can observe the case of CDs that are currently worthless because of current technology, or collectibles of some franchise that can cost much more compared to years ago.

"From the Parts of the Price of Commodities"

"The Wealth of Nations" shows that in the earliest societies, the worker retained all the profit from his work. However, some workers started storing extra products.

These extra goods were used to pay other workers, giving rise to what we now call bosses.

Thus, the profit was no longer maintained by the worker, part of it was directed to the boss. This is because the worker should pay for the land use of the owner.

So Adam Smith says that the price of each product is composed of three things: the work required to manufacture it, the profit that the manufacturer wants to have, and the rent paid.

Since rent and labor usually make up the bulk of the price of the product.

"From the Natural Price and the Market Price of the Goods"

Everywhere, be it country, state, or city, there is a tendency of an average value for a certain type of work. This value is defined by "The Wealth of Nations" as "natural price." What determines this value is nothing more than the law of supply and demand.

Now, "market price" is the effective price at which a product is sold, that value determined by supply and demand. According to Smith, the trend is that the "market price" varies around the "natural price".

"From the Labor Wages"

According to "The Wealth of Nations" there must be a minimum limit value that a worker must receive for his services. This value must be sufficient to keep the worker alive.

If the value is lower than this, he would stop working, obviously, because he would know that there is no possibility of continuing to live and there would be no way to raise his family.

Adam Smith makes an economic analysis of slavery. He says that having a salaried employee is more profitable than having a slave.

In addition to not having the motivation to work, a sick slave presents costs to his employer, unlike the salaried employee who pays his own expenses.

Smith further argues that workers should have weekends off, so they can rest and work better.

"From Wages and Profit in Various Manpower and Capital Jobs"

Why are some jobs paid more than others? Well, Adam Smith gives you five reasons for that.

The first is that some jobs are dirty and gross, so the pay for that work is increased.

The third is temporary employment. The pay for this job is higher because the person must also be paid for the time they will be looking for another job.

Another reason is responsibility. According to Smith:

"We entrust our health to the physician [...]. Such confidence could certainly not be deposited in people of a very low condition or means."

The fifth reason is the probability of success or failure in that job. The author says:

"The probability that a given person qualifies one day for the occupation for which she is educated, is very different in different occupations."

On the other hand, "The Wealth of Nations" mentions, further, that government restrictions and taxes on imported goods shield domestic manufacturers from outside competition. In this way, prices and profits are kept high, but everyone is harmed.

There are also government policies that veto individuals moving to other places to work.

According to Smith, just as companies move to better workers and lower costs, workers will also need to move wherever they want.

Books about work and economy

In the recommended "Everybody Matters", authors Bob Chapman and Raj Sisodia explore how true leaders must continually study to develop and develop those around them so that they also become excellent leaders who believe and value people.

In addition, employees should be encouraged to innovate and try new things, even if they fail. This makes them realize that managers have full confidence in their potential and in their work. In the book, this practice is called "responsible freedom".

Ed Catmull, author of the book "Creativity, Inc", advises: always give more preference to people than to ideas, because creative people create good ideas, but good ideas can be destroyed by bad teams.

The rising rates of depression and disengagement from workers may explain why those in power in corporations and the government now prioritize the cultivation of happiness.

Business leaders and public policy managers are intensely dedicated to the techniques and technologies they can use to measure and mitigate stress, apathy and depression.

At the end of the book, Adam Smith makes it clear that some things can not work properly in free trade, that is, they should be owned by the government. Examples would be schools, police and hospitals.

Well, now that you are better informed about what free trade is, you can already form your opinion on the subject. Of course, if you think you should go into the subject to know more, just get the complete work of Adam Smith.

Did you like this summary of the book "The Wealth of Nations"?

What did you think of Adam Smith's "The Wealth of Nations"? Leave your feedback so we know what you think and always offer the best for you!

If you want to delve deeper into one of the more important books of Economics, be sure to purchase the book by clicking on the image below: 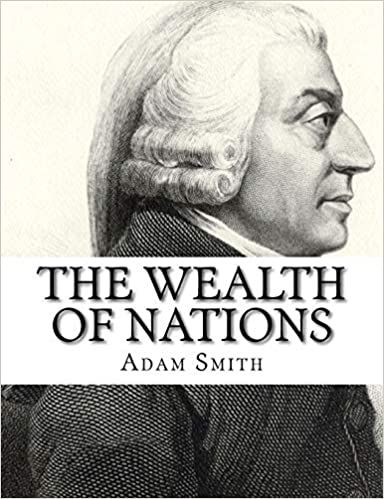