Understand why it is important to learn from mistakes, an issue where leaders often fail, and how to overcome the pitfalls of organizational life.

Who hasn't heard that you learn by making mistakes? This sentence represents the basis of the study made by the authors Laurence G. Weinzimmer and Jim McConoughey, which gave rise to the book "The Wisdom of Failure".

Between the disappointment for having made a mistake and the lessons that the mistake teaches to avoid similar problems in the future, there is a long way to go, but it is very worthwhile and adds wisdom to the journey.

But what if we say that it is possible to learn from mistakes without wearing out or suffering from the consequences that they bring? Well, just learn from the mistakes already made by other people in the past.

Want to know more? So continue reading this PocketBook and surprise yourself.

About the book "The Wisdom of Failure"

Over a little over 200 pages, the work "The Wisdom of Failure", based on a seven-year study of almost 1, 000 managers from 21 industries, aims to teach how to prevent preventable errors.

According to Larry Webber, CEO of the "W2 Group", the book provides research, case studies and tools to make failures our biggest successes.

Author Laurence G. Weinzimmer is a management professor at Bradley University, an internationally recognized speaker and consultant on issues related to strategy and leadership. He is also author of the bestseller Fast Growth: How to Attain It, How to Sustain It.

The other author, Jim McConoughey, is an experienced CEO, sought after as an expert in business development, leadership, and early stage capital investments. McConoughey's particular focus is working with small and medium-sized organizations to identify and assess strategic growth opportunities.

The content of this book is recommended for leaders who want to understand what has not worked and why, so they can develop and grow from their failures.

And for anyone who wants to turn their failures into success.

Main ideas of the book "The Wisdom of Failure"

Download "The Wisdom of Failure" Book Summary in PDF for free

Overview: About the Mistakes

The book, "The Wisdom of Failure", cites former Caterpillar Inc. CEO Jim Owens as someone who has largely succeeded in learning not only from his own mistakes, but from the mistakes of others.

Owens said he believed that moments of global structural failure fit as valuable learning opportunities. For him, leaders must use these opportunities as never before.

Likewise, authors Laurence G. Weinzimmer and Jim McConoughey report that former Ford Motor Company board member Gerry Shaheen told them that the ability to recognize and learn from their own mistakes is the first step in becoming a great leader.

However, Shaheen added that the ability to learn from others' mistakes is not just critical to successful leadership - it's great!

The work, "The Wisdom of Failure", also mentions an interview by former Procter & Gamble CEO A. G. Lafley, with Harvard Business Review, in which he refers to his mistakes as gifts that gave him opportunities to growth as a leader.

This can be explained by the fact that mistakes come in the healthy risk-taking package and grant new ways of thinking and new visions of improvement as a leader.

Thus, the real failure is not to make mistakes, but to avoid mistakes at all costs. "Being error-free is not a success - in fact, it is not even possible," say authors Laurence G. Weinzimmer and Jim McConoughey.

While it seems safer to ignore mistakes, it stifles growth and condemns to repeat the same mistakes, which explains why some leaders deal with the same problems over and over.

In the research that supported the work, the authors concluded that leaders who learn from their mistakes obtain benefits such as:

They believe that these qualities generate financial advantages such as increased profit and revenue growth for the organization.

In the second phase of the research by authors Weinzimmer and McConoughey, which would become the basis of the book, 115 leaders, divided into 13 focus groups, were asked to validate the study's original findings, identify the most damning errors and help see how people deal with these issues.

The book, "The Wisdom of Failure", cites some errors that can be found in organizations and that are very harmful to them. One such group of harmful misconceptions is the so-called unbalanced orchestration of ideas.

The unbalanced orchestration of strategies in more detail

While a successful orchestration of strategies allows you to thrive in good times and bad, failing can drop everything. The so-called unbalanced strategy orchestration that is so damaging to a company, is born out of three leadership mistakes:

It is the inability to say no. This can translate into saying yes to a potential customer who does not fit your strategic direction, just for the chance to generate short-term revenue.

While chasing money can be good in the short run, in the long run it can destroy the ability to lead strategically.

For ATS Corp. President Dick Blaudow, it is difficult to say no to potential customers and their money, but trying to be everything to everyone means losing sight of the company's purpose and eventually being buried.

Wander out of the box

For them, wandering outside the box also violates the leadership principle of valuing effectiveness in all ventures.

Efficiency refers to doing things correctly, trying to improve something that is already done, is internally focused and has little to do with growth.

Effectiveness is doing the right things, the ideal things for the client, it is strategically focused and takes into account the organization in the context of its markets and not in its own context.

This mistake translates into the company that is very efficient in making a product, but that makes the wrong product for the needs of its customers. Therefore, it fails to be effective.

Another classification of mistakes that need to be avoided even before they happen, so that you don't have to deal with their terrible consequences, are the necessary dramas, which can be great for a film, but are not good for an organization.

Poor drama management triggers the leader's failure to manage teams. Research based on the book, "The Wisdom of Failure", indicated that unnecessary drama is common in organizations and has the effect of alienating people: both good employees and good customers.

It is the high school drama repeating itself. According to authors Laurence G. Weinzimmer and Jim McConoughey, it is a leadership style that makes the work environment super dramatic and abuses the authority to motivate employees on the basis of fear.

The reference is to people who want everyone to like it at any cost, which can be disastrous, since leadership requires making unpopular decisions.

The book, "The Wisdom of Failure", is against leadership that seeks to make everyone likeeach other. The argument is that this generates passive-aggressive behaviors, since there are no healthy ways to resolve conflicts face to face. The result is an apparent harmony.

There are those who defend internal competition in the teams, but the mismanagement of this competition, which is an example of distraction in relation to the company's purpose, can create division and end up with work units that previously worked well.

Distraction from purpose also includes having favorites on the team and relying too much on individual talents in place to leverage the synergy of the team as a whole.

As explained by authors Laurence G. Weinzimmer and Jim McConoughey in the book, "The Wisdom of Failure", each person has their own personality traits, but there are a few that need to be worked on by leaders who want to prevent costly avoidable mistakes for your organization.

There are personal characteristics that in less extreme ways can be useful, but when they are exaggerated and distorted they result in failure s. The following errors can be produced by personality problems:

He is the leader who does not know how to delegate: he wants to do everything. Your sense of superiority does not allow you to leave responsibilities in the hands of others. As a result, it fails to allow employees to develop their skills to be good team members, creating stagnation and killing growth opportunities.

Authors Laurence G. Weinzimmer and Jim McConoughey explain that when he gets involved in every small decision on the team, he fails to lead the organization and alienates his subordinates.

Those who stay on the payroll for a long time, bosses who have no interest in their jobs and celebrity CEOs - all three are examples of people disconnected from the company's culture.

Lost in their own world, they are unable to communicate with the main parts of the company or to lead the organization and, therefore, are not really involved with the company.

Some are naturally narcissistic, while others fall into the ego trap, something that can get in the way of many things in life, including efficient leadership.

"A self-oriented leader will make bad choices most of the time simply because he cannot see beyond himself," points out the book "The Wisdom of Failure".

According to Caio Carneiro, author of the book "Seja Foda!", Success is 99% made of failure. Furthermore, if you consider failure as the opposite of success, you will not build anything productive, since every failure is just a step on the ladder of your success.

The work "#VQD: Vai que Dá!", By Joaquim Castanheira, reports on the successful cases of ten Brazilian businessmen. Rogério Gabriel, founder of Grupo Prepara, says that optimism and self-confidence are essential for an entrepreneur.

In addition, learning from frustrations is critical to making better decisions in the future.

Finally, the work "Vai um Cafezinho?", By Luciana Medeiros, tells the story of the businesswoman, Maria Luisa, who brought this franchise to Brazil. In the work, she advises: don't be in a hurry; you have to take it one step at a time so you don't get run over in the process.

Did you like this summary of the book "The Wisdom of Failure"?

What did you think of this summary? Do not forget to give us your feedback in the comments!

In addition, you can purchase the complete book by clicking below: 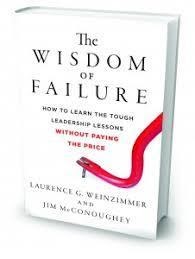