Socrates said that you cannot teach anybody anything, you can only make them think. Adam Grant will make you think tons in this summary.

At some point, you've probably heard that if you drop a frog into a pot of scalding hot water, it will immediately jump out.

But what if you drop the frog into lukewarm water and gradually increase the temperature? According to common sense, the frog will die. He is an irrational animal and incapable of rethinking the situation, and doesn't realize the threat until it's too late.

According to Grant, this is not true. Thrown into the scalding pan, the frog will get badly burned and may or may not escape. In fact, the frog is better off in the simmer pot: it will jump as soon as the water starts to heat up uncomfortably.

But what is the moral of this story? It's not the frogs that fail to reassess. It's us. When we hear the story and accept it as true, we rarely bother to question it.

In "Think Again: The Power of Knowing What You Don't Know", you will learn to question common sense and stop seeing life in black and white. Ready to find out what you don't know? So let's go!

About the book "Think Again: The Power of Knowing What You Don't Know"

The book "Think Again: The Power of Knowing What You Don't Know" was published on February 02, 2021, by Viking.

The book has 304 pages divided into 11 chapters. In them, the author brings different parts of the process of rethinking and reassessing what we think we know.

About the author Adam Grant

Adam Grant was born in Michigan, United States, in August 1981. He holds a degree in Psychology from Harvard University and a Ph. D. from the University of Michigan.

He has been recognized as one of the ten most influential management thinkers in the world by Fortune magazine. In addition to being the highest-rated professor at Wharton, one of the world's top business schools, for seven consecutive years.

Adam Grant is the author of three New York Times best-selling books, which have sold over a million copies and have been translated into 35 languages, including "Originals" and "Give and Take ''."

The book "Think Again: The Power of Knowing What You Don't Know" is recommended for people who feel the need to change and want to get out of their comfort zone.

But it is also indispensable for entrepreneurs, teachers, and politicians who want to reinvent themselves.

Main ideas of the book "Think Again: The Power of Knowing What You Don't Know"

Download the "Think Again" Book Summary in PDF for free

According to the author, there is a phenomenon known as the first-instinct fallacy. This phenomenon occurs when we maintain our first decisions rather than rethinking our choices.

A very clear example is when we take multiple-choice tests and we start to second-guess our answer and think about changing it. In the end, the vast majority of people decide to stick with the initial response.

But why is it that most people are afraid to change the answer, even though surveys indicate that the chance of getting it right increases when we rethink our answers? Adam Grant claims that this is because humans hesitate at the very idea of rethinking.

Updating Our Own Views

But if we are afraid of the idea of rethinking, how can we update our own opinions?

First, you need to understand that rethinking is a skill set, but it's also a mindset. We already have some of the mental tools we need.

Furthermore, within that mindset there are four types of mindsets:

Tiring someone until they give up on arguing with you is not the same as convincing them with arguments, even if they are logical. The name of this practice is logic bullying, which is when you use logic to pressure others until they agree with you or give up because of fatigue.

Besides, who guarantees that your argument, however logical, is right? The real truth is often lost to us when we are so confident that we become arrogant. Remember that being smart or having a lot of knowledge doesn't make you better than others.

If you want to make connections with other people and promote the exchange of ideas, try to influence them to rethink ideas instead of forcing yours!

The first step in creating true connections with other people is to get rid of prejudices and stereotypes. According to the book "Think Again", the smarter someone is, the easier that person is fooled by stereotypes.

Do you know why this happens? Because people with higher IQs tend to recognize patterns more easily and be deceived by their pre-established beliefs.

Before opening other people's minds, you must open your mind and not criticize or judge the other.

Living in society is hard, but living in a polarized society is even worse. What to do when you're talking to someone who has totally different views from yours? Do you argue, ignore or rethink your beliefs?

Your answer indicates a lot about the kind of mindset you have and how you deal with situations where the collective forces you out of your safety zone and forces you to rethink what you think is true.

For Adam Grant, this impasse is due to the fact that human beings tend to see the world through a binary bias. He is responsible for creating the illusion that the world is split in two: right or wrong; good or bad; true or false; black or white.

Disrupting the binary thinking process would be the only way to create an ecosystem capable of practicing collective rethinking.

The way you deal with the collective can lead to tunnel vision.

There are a few things to consider to avoid tunnel vision:

So, ready to think and rethink after reading this summary?

In the work "Everything is Obvious", by Duncan J. Watts, common sense is the essence necessary for human beings to live together, is invisible to our eyes, and remains rooted in our unconscious. However, being guided by common sense increases the chances of faulty decisions, making it necessary to explore other ways of thinking.

Simon Sinek 's "The Infinite Game" states that there are two types of games in life: finite and infinite. In a "finite game" we know all the information to achieve victory. In infinite games, we don't know all the variables. Life would be, then, an infinite game in eternal adaptation.

Finally, in the book "The Art of Learning", by Josh Waitzkin, we learn from personal accounts of the author how excessive self-confidence can be harmful, especially when we need to unlearn an old pattern to learn a new one.

Did you like this summary of the book "Think Again: The Power of Knowing What You Don't Know"?

We hope you enjoyed our summary and were able to reflect on the ways in which the unknown can be the secret weapon for getting to know the world and people. Leave your opinion in the comments, your feedback is very important to us!

In addition, you can access the complete book by clicking on the image below to buy it: 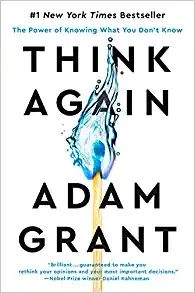