Get off the line of common sense and develop smart thinking with this summary!

Do you want to think outside the box, being innovative and making a difference? Check the ideas of the authors Steven D. Levitt and Stephen J. Dubner in the book "Think Like a Freak"!

Culturally, social precepts are formed, determining how we should act in certain situations automatically, without rethinking what is right or wrong.

This person thinks differently from the conventional, going in the opposite direction of the social habit.

This summary will present the characteristics of the Freak, keep reading!

The book "Think Like a Freak: The Authors of Freakonomics Offer to Retrain Your Brain" was written by Steven D. Levitt and Stephen J. Dubner and published in 2014, by William Morrow Paperbacks. It is a continuation of "Freakonomics" and "Superfreakonomics" and has 304 pages and 9 chapters.

This work is essential for anyone who wants to think intelligently, learn to be a freak, and question new solutions differently than conventional.

About the authors Steven D. Levitt and Stephen J. Dubner

Steven D. Levitt was born in New Orleans on May 29, 1967, he is currently an American economist and professor of economics at the University of Chicago.

He is considered one of the best economists and best known among laypeople, having co-authored the best-selling book "Freakonomics" (2005). Levitt was chosen as one of Time Magazine 's "100 People Who Shape Our World" in 2006.

Stephen J. Dubner is from New York, born on August 26, 1963, is currently an American journalist, author of four books and numerous articles.

Dubner's first published work appeared in Highlights for Children when he was 11 years old.

The work "Think Like a Freak" is suitable for those who want to solve questions outside the moral precepts defined by the society in which they live, obvious thoughts, aiming to think outside the box.

Main ideas of the book "Think Like a Freak"

In this summary, we will present what the authors explore unusual content, without connections between them, but that explain several causes of problems in society. So let's start?

Overview: What does it mean to think like a Freak?

To think like a freak, for the authors Steven D. Levitt and Stephen J. Dubner, is to think beyond the common sense of society. Also, this thinking influences decision-making processes based on the people with whom you live.

This new thinking will change the way you analyze situations for the better, aiming to resolve conflicts more easily.

However, its popularity may interfere, as there won't be the same attitudes as a society for certain purposes.

Overview: What is your problem?

In certain situations, questions are more important, so that issues are not dealt with in a limited way, say the authors Steven D. Levitt and Stephen J. Dubner.

To illustrate the idea: If in a competition the question is "How can I win?", or if the person asks "How will I win?", they will define strategies for winning and will win the competition.

But the fact is, if you ask the wrong question, you will get the wrong answer.

It is not always easy to find the root of a problem. One of the most effective strategies for doing this is to think unconventionally and strive not to confuse a symptom with the cause of the problem, as it is emphasized in the book "Think Like a Freak".

Based on Steven Levitt and Stephen Dubner's idea, a Freak and a child have similar thoughts as they question more and the chances of being deceived are mitigated.

According to the book "Think Like a Freak", a mature person usually thinks objectively, focuses on one thing, unlike children who observe everything around them. Focus, while extremely important, can make you more vulnerable and more prone to error.

To question the obvious is to inquire about things that others or even ourselves don't realize, resulting in better ideas.

Overview: How to convince people who don't want to be convinced

To convince someone of your ideas, the authors Steven D. Levitt and Stephen J. Dubner explain that you must first listen to what the person has to say. It is extremely important to know their opinion.

The biggest difficulty in convincing is the fact that many people simply ignore the things that are said and are not part of their worldviews.

However, you need to be ready to convince people of your ideas. This is because, whenever you disagree with "public opinion" or challenge someone's thoughts, you risk starting a discussion, as indicated in the book "Think Like a Freak".

So, pay attention to what they say. After listening to people and showing respect for their opinion, you will be able to hear them and tell a story.

Also, accept the arguments of those who want to convince and, only later, clarify what you think differently.

Overview: The good side of giving up

We always listen to the idea of never giving up, that only reaches goals who don't give up. However, for a Freak, thinking like that isn't good.

In certain situations, giving up or canceling is the best choice. And why do people often hesitate?

The authors Steven D. Levitt and Stephen J. Dubner affirm, in the book "Think Like a Freak", that, most of the time, this happens through social pressure or fear of losing what has already been invested financially. It also reflects the time spent when we dedicate ourselves to something. We are afraid to throw away all the wasted time.

But, when we get too attached to something we know won't work, we may lose better opportunities.

It is for these reasons that we must get rid of such dogmas. We should not believe these common-sense thoughts - they can affect (and greatly) our happiness.

You need to analyze the situation carefully and find out what is best for you without taking into account these established dogmas.

The author Nir Eyal, in his work "Hooked", reports that triggers stir up behaviors. They are suggestions telling people how to act. Advertising capitalizes on these motivators.

For Daniel Goleman, author of "Emotional Intelligence", strong emotions can interfere with attention and all aspects of clear thinking. Instead of trying to eliminate their feelings, people should strive to find a smart balance between reason and emotion.

Finally, in "Awaken the Giant Within", Tony Robbins explains that maintaining a commitment to your decisions can be challenging, but the harder you try, the easier it gets. So when you fail to evoke a change in your life, don't be discouraged. Instead, think about what you can learn from failure.

Here are some tips to get you thinking beyond common sense:

Ready to think like a freak? Leave your feedback on the work of the authors Steven D. Levitt and Stephen J. Dubner!

And if you want to know all the details, you can buy the book by clicking on the image below: 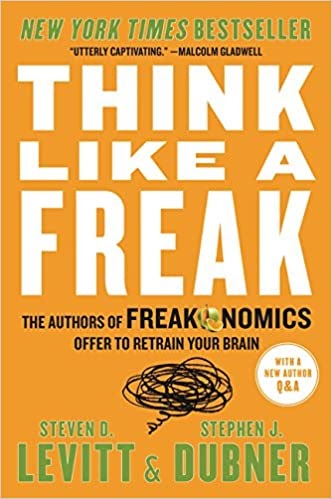