See what lessons made Vicente Falconi, a great management consultor, revolutionize the management model in Brazil.

In the 1990s, most companies were "messy" and with a closed economy. To get an idea, the beers varied in taste throughout the day in the same factory. And what is the solution to this problem? To create an effective management model. Here Cristiane Correa presents the Vicente Falconi methodology to success!

Vicente Falconi is a reference in Brazil: all the great entrepreneurs learned a lot from him. There were countless companies, such as Gerdau, Unibanco, Ambev, Sadia, among others.

So, what is the secret of this management model and how does it work? How to add it to your business? Stay with us in this summary and find the answer to all these questions!

About the book "Vicente Falconi"

The book "Vicente Falconi", was published in 2017 in order to tell the thoughts and trajectory of Falconi, bringing together the main ideas of management and leadership that are capable of transforming organizations.

The management model is based on Japanese postwar companies that sought to achieve efficiency and eliminate waste.

In addition, in the book, we find how Falconi developed his ideas on setting goals for all employees of a company, his orientation to the country's rulers, and his consulting services.

The writer Cristiane Correa also wrote "Abílio - Determined, Ambitious, Controversial" and "Sonho Grande", which tells the trajectory of the three richest entrepreneurs of Brazil, thanks to the consultancies made by Falconi.

Thus, the three models together represent her bestsellers and have sold more than 600 thousand copies. She is also a journalist and speaker, specialized in business and management.

The book presents ideal content for those who wish to deepen their knowledge of management and initiate the transformations necessary to generate results.

The author reports very well the management challenges faced in large companies, thus preparing you to apply the knowledge in the most efficient way.

In this summary, we will explain the trajectory of Vicente Falconi and present the main ideas of the management model responsible for leveraging the success of a company.

You will find below the ten compulsory rules of the method created by him:

Download the "Vicente Falconi" Book Summary in PDF for free

Overview: Who is Vicente Falconi?

Vicente Falconi Campos was born in 1940 in Niterói-RJ, Brazil, and graduated in engineering from the Federal University of Minas Gerais (UFMG), where he acted as a professor for almost thirty years.

In the course of his journey, he has met various universities and industries and majored in engineering at the University of Colorado School of Mines in the United States.

Given these experiences, Falconi developed a management system that he considered the ideal for Brazilian companies to achieve excellent results. This model was based on his experience in Japanese methods and concepts, unknown in the country at the time.

Disseminating this knowledge, he became a reference in effective management and founded his company Falconi Consultores de Resultado, with more than 600 consultants spread throughout Brazil and around the world.

In this branch, he advised large companies like Gerdau, Sadia, Unibanco, and Ambev to be more efficient and profitable, setting goals for everyone involved in the process.

Falconi extended his path to the government, carrying out projects for states and municipalities. A great example is the risk of a "blackout" in 2001, creating targets for industries and businesses to reduce electricity consumption, setting a target for the whole country.

Finally, he published six books in the area of Business Management that sold more than one million copies.

Without measurement, there is no management

According to Cristiane Correa, measurement is one of the concepts in which Falconi takes more into consideration in its consultancies.

In order to have effective management, it is necessary to be based on statistical formulas, solving problems in the analytical form with zero guessings. One of Falconi's preferred tools is the PDCA method.

But he says that none of this is more important than people.

To consolidate effective management, it is necessary to create a method of how the process works and translate it to employees in the best possible way.

In the book, the author uses an example in which one can transform "the process" into an agenda (having all the step by step); in the example, one imagined the situation in which "the process" is distributed to the sellers of some brewery so they succeed in their sales.

According to Cristiane Correa, improvement is achieved through reached goals and the key is to simplify everything and leave it clearly.

The goals should be established by each management level and preferably by a financial criterion. According to Falconi, financial metrics are responsible for seeing whether the company is doing well or not.

In addition, goals must be "deployed" to the lower levels of the hierarchy so that everyone can make their contribution.

Falconi considers that five is the maximum number of goals an employee can have without losing focus.

That's because when a goal is not achieved, one of the first actions is to create excuses and explanations, and this can greatly harm your business.

"To be successful, it is necessary to follow the established guidelines, otherwise, the PDCA method does not work, as it happens with several companies."

Difference between "Current Situation" and "Goal"

According to the author, one of the lessons that can be drawn from this topic is that we should always be as sincere (as possible) about the current situation of the company.

Falconi always says that "managing is solving problems and achieving goals". Therefore, always expose the problem, don't try to hide anything, after all, a problem is only solved when it is identified.

Tools like the 5S program and Ishikawa diagram began to get famous where the consultant went.

According to Cristiane, for Falconi a great leader is one who can achieve his goals and bring good results, always working as a team and valuing it.

Practicing humility in leadership is fundamental. A good leader is the one who always wants to learn more and not the one who gives only orders. In addition, leaders are able to recognize that goals are not hit with individual talents, but rather with team efforts.

Falconi argues that leadership can not be met by other team members, as well as knowledge and skill.

Falconi has always argued that the turnover of a company should be around 4% but in most of the institutions where he consulted, the numbers were exorbitant, reaching 30%; institutions that, according to him, can be considered "sick companies" and with high dissatisfaction of its employees.

One of the solutions proposed by Falconi was to treat these "sick" people; which consisted of conducting a series of interviews with the employees of those companies to find out the critical points.

Next, he compared the current state of the company in question with that of other companies that maintained controlled levels.

After all, the main cause of the problem was found and consisted, in most cases, of the lack of leadership. The current leaders didn't understand what was important to the team.

The worker needs much more than wages, he needs respect, be recognized, and have his needs met. For this, Falconi was based on the theory of Maslow.

Therefore, Falconi considers that 70% of the result is made of leadership. It is a result of success to have a great leader ahead, a person who makes every element of the team believe in their own potential and that inspires people.

In addition, he reports that it is essential to provide opportunities for those who present results and to remove from 5% to 10% of those poorly evaluated during the year. Thus, the environment becomes meritocratic.

Past results are not good for the future

According to Cristiane Correa, solutions to problems in the past may not be as effective today. Therefore, we must always ask and understand the true reason for things.

When we stop asking, we do the same thing. When we ask why something works that way, we often hear the answer that "it's always been that way".

We should not settle for good results: on the opposite, we must always seek continuous improvement and new solutions to problems.

For John C. Maxwell, author of the "Leadership Gold", the best leaders are those who know how to listen. Listeners know what is happening because they are attentive. They learn better than others because they absorb from various places. In addition, good listeners have the ability to better see the strengths and weaknesses of other people.

In the book "The Leadership Pipeline", Ram Charan emphasizes that functional leaders need to manage certain areas that are out of their expertise. Therefore, they need not only seek to understand this different work but also to learn to value it.

In "The Effective Executive", Peter F. Drucker explains that executives can be bright, imaginative and informed, and still be inefficient. Effective executives are systematic. They work hard in the right areas and their results define them. They are knowledgeable professionals who help the company to beat its goals.

The history of the engineering professor is sure to impress, especially when it comes to management.

Start sharing the lessons you have learned with Falconi's management model in your work environment or even in your own business, and start to reap the best results.

Did you like this summary of the book "Vincente Falconi"?

Are you ready to boost your company's results through the Falconi methodology? Did you find this content useful? Leave your feedback in the comments! 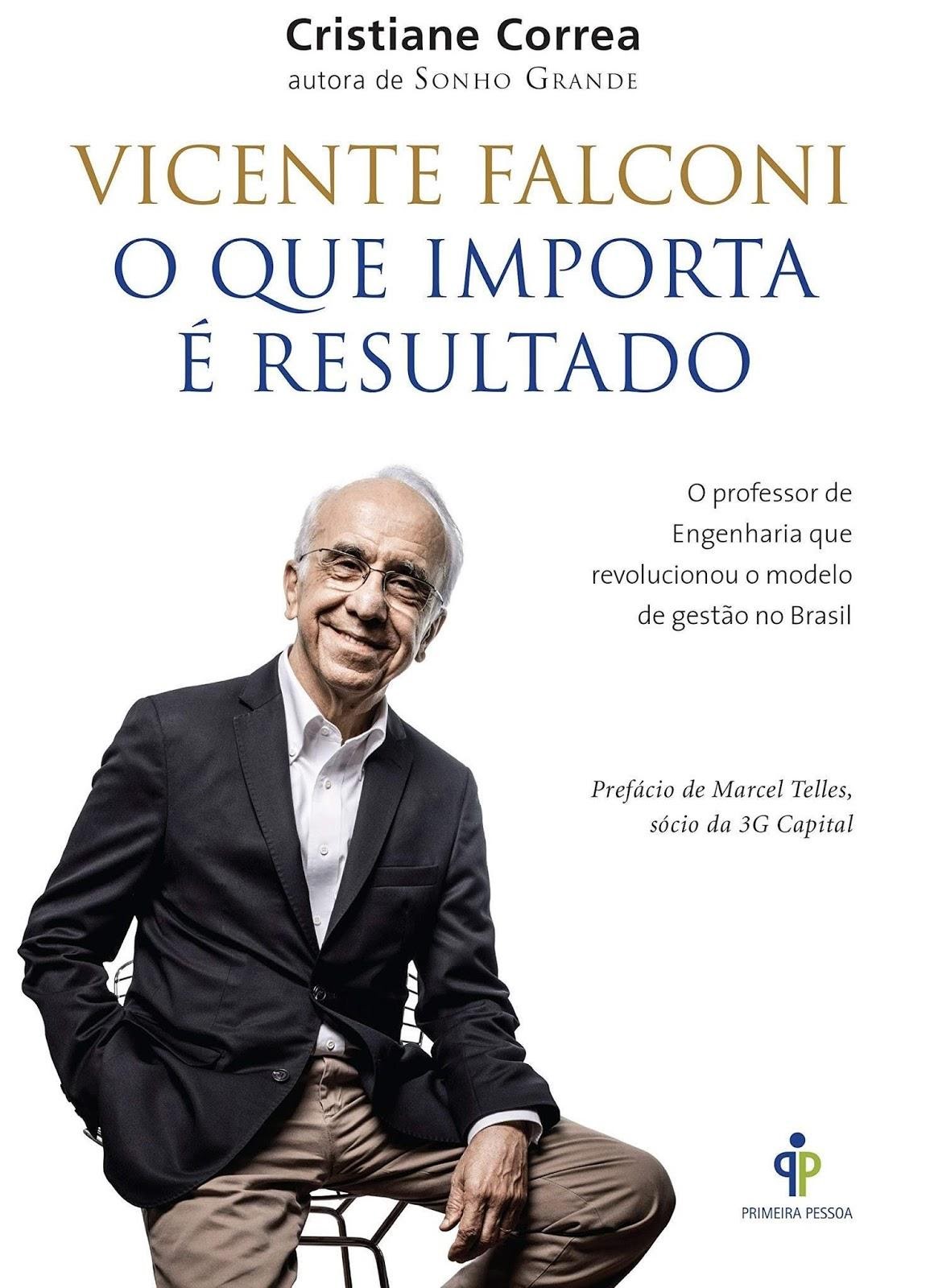