Through the life story of one of the biggest retail entrepreneurs in Brazil, learn to overcome difficulties with perseverance, humility, self-confidence and entrepreneurship and have a successful path.

Find out more about Samuel Klein's entrepreneurial strategy and how the slogan "Total dedication to you" fell into popular taste, in this summary of the book "Viver e Deixar Viver", from Elias Awad.

Can you imagine anyone who lives in Brazil and has not heard of Casas Bahia? It doesn't exist, right?

How did this retail chain become giant and consolidated itself, being part of the daily life of Brazilians with its products, TV advertisements or in any city with one of its stores?

None of this was achieved overnight. For all this to happen, its founder Samuel Klein faced the difficulties of being a Jew in times of World War II and the cultural barrier of living in another country.

"Viver e Deixar Viver" was published for the first time in 2013 and already has its 5th edition.

The work consists of a compilation of stories told by Samuel Klein in 232 pages, divided into 7 chapters of a moving story of personal and professional overcoming.

About the author Elias Awad

Elias Awad has a degree in journalism and business administration and a postgraduate degree in leadership and people management.

He achieved prominence in his career as a journalist in major TV stations such as Globo, SBT and SporTV, but he was challenged to navigate new seas.

As one of the greatest business biographers in the country, Awad also learned a lot in this trajectory.

Currently, he gives lectures in a talk show format, where he gathers the best advice from big names in Brazilian entrepreneurship.

For entrepreneurs, managers, and people who want to know a little more about structuring a market and how to take advantage of the best opportunities for your business.

At the beginning of the 20th century, in a village called Zaklikov, located in Poland, a family of Jewish origin lived. Schmile, the third child of the Sucher and Szeva Klein couple, was born in 1923.

The country was one of the least developed in Europe, although it lived under strong German influence. Everything in the village was very modest and humble. At that time, post-World War I tension still dominated the continent, which caused economic and social uncertainty.

The boy Samuel always showed an admiration for his father's profession, carpentry, and helped him whenever he could.

It was through his father's education and the high demand for furniture in the village and surrounding areas that Samuel learned a lot about how to deal with the public.

The days of peace were interrupted in 1939, when Adolf Hitler invaded Poland.

Samuel was separated from his family, staying with his father. The two became prisoners and worked hard in concentration camps as carpenters.

As they were very good at what they did, they ended up receiving news of what was happening outside the concentration camps. The two suffered a lot, until at a certain point, Samuel manages to escape the German soldiers and ends up abandoning his father.

After the Second World War, he managed to find his father and some of his brothers and started a new phase of his life: rebuilding himself with what he had left.

In Berlin, he met Ana Wangerin, a German girl with whom he fell in love. They married and had their first child, Michael Klein.

Adventure in America, the land of opportunity

After getting married and seeing that Europe was still suffering the aftermath of a great war, Samuel, on the advice of some friends, decides to try life on another continent, America.

He wanted to leave behind the hardest and saddest story of his life. He had heard that Bolivia was a promising country and that it would have a great chance of developing there.

With a certain fear about the sudden idea of change, he ended up buying tickets to Brazil, as he had an aunt he knew and lived in the city of Rio de Janeiro.

His idea was to move quickly to Brazil, to get used to the air of South America and then settle permanently in Bolivia.

Two months after the Kleins arrived in Bolivia, nothing fascinated them anymore. And as things don't always go as planned, a civil war broke out and Samuel ended up returning to Brazil, initially alone, to get some money to take Ana and Michael, his wife and son. They arrived just 40 days after Samuel.

With the family complete, he began to plan what their future in the new country would be like. He did research on the activities that existed in Brazil, talked to several people and among them he always listened not to get excited about Rio de Janeiro.

The city was wonderful, but the c ountry's money opportunities and economic and industrial strength were in São Paulo.

It was in this city that there was work, employment and chances of success.

Convinced of this, he left for the city of São Paulo. All that excitement, people in a hurry, looking quickly at their watches, left Samuel delighted. "This place was made for me," he said.

Overview: From peddler to merchant

With a few dollars, fruit of the economy he made in Europe, Samuel bought blankets for resale and started his peddler business.

He realized that, despite São Paulo being promising, it had a large flow of purchases and sales. He decided to go slow and ended up moving to São Caetano do Sul.

There his market began, knocking on doors, offering his products. He became familiar with the townspeople, who welcomed him with open arms.

He was visionary enough to realize that splitting a purchase into a receipt would increase customer loyalty, an idea that ended up differentiating his business from the competition, even after years.

As the family grew, new expenses and responsibilities came. Professional success would solve it, but for that to happen, there should be business continuity.

Customers, in addition to paying the installment, should continue to buy more products.

He worked hard, selling his products door to door and began to experience great professional growth. He was able to save money and even started to have employees to help with sales.

With enough money to invest in capital, he bought himself a small furniture store called "Casa Bahia". Little did he know that this attitude would start a great story, right?

The trade grew, Samuel made calculations at the time of sale quickly and was a great merchant. The idea that he needed to grow even more did not leave Samuel's mind, but until the establishment was well-structured, he would not leave for a branch.

A year after the opening of the first store, the revenue already reflected Samuel Klein's way of working. All of this was a reflection of his five-year apprenticeship when he peddled on the streets of São Caetano.

More than money, he started to gain prestige among suppliers, who saw him as a quality customer, punctual and with potential for growth.

A few years later, Samuel was walking down the street and saw a property with a rental sign, it showed his interest and there his second store appeared, which we now call "Casas Bahia".

The store quickly became a smash hit, and little by little, new products were added for sale in stores. More and more he became convinced that selling appliances was a big deal.

Thus, furniture, appliances, televisions (including a product that was appearing at the time and were the sensation of commerce), circulated day and night in the trucks of "Casas Bahia".

After a while, a young man was hired for the company's advertising department. He had the great challenge of convincing his boss that he needed advertising to sell. Samuel didn't like it, didn't want to, and said he didn't need advertising.

This image was short-lived. The results with the advertisements were excellent.

It was at that time that the doll from Bahia that we know today emerged.

The slogan "total dedication to you" came to convey to the public about the trust and the importance of it for the rise of the company, after all, if it weren't for all customers, there wouldn't be Casas Bahia.

With a consolidated network in the "ABC" region of São Paulo, "Casas Bahia" was going through a process of adaptation to market fluctuations.

After an economic advance in the 60's and 80's, the country was going through an inflationary period. With this, the prices of material goods could be adjusted up to three times in the same day.

How did Klein maintain his business? Anticipating the crisis.

He made his money circulate, buying large quantities at lower prices. That way you could resell it at a better price and negotiate the best payment terms for your customers.

More and more, stores were opening. In 1995, "Casas Bahia" took an important step. The "Só Dinheiro" chain was acquired, totaling another 15 new points of sale for Klein.

That year, too, the São Paulo borders were broken and activities began in Rio de Janeiro, with the purchase of "Casas Garson".

At the end of 1995, there were 139 stores and sales of more than one and a half billion dollars.

AS presented in the book "Viver e Deixar Viver", "Casas Bahia" consolidated itself as a company present in most of the national territory, making many Brazilians' dreams come true with furniture and appliances.

But the 2000s also brought personal losses, such as the death of Samuel and Ana's first grandson, at the age of 27. This shook up the family structure and caused the entrepreneur to reduce the pace of work to enjoy more time with the family.

At the age of 90, Samuel Klein followed the stabilization of his work. Revenues increased every year, the company was the leader in the retail sector of home appliances, electronics and furniture.

The target audience of "Casas Bahia" continues, predominantly, in classes C, D and E, with an average income of 2.5 minimum wages.

The motto "total dedication to you" obliges the sales team to facilitate credit installments in purchases.

"Credit at Casas Bahia is a human science, not exact." (Samuel Klein)

With more than 50 thousand employees and branches all over Brazil, he left the company's management in the hands of his son Michael.

In the book "Becoming" you will learn the story of Michelle Obama, the former first lady of the United States who faced several challenges, breaking barriers with strength and determination. This story will give you insights to realize that persistence is the key to success.

In "Uma Trufa e... 1000 lojas depois!", Alexandre Tadeu reports on his trajectory as owner of the Cacau Show and provides several insights. He says that commitment is the key word that an entrepreneur must follow, as he has the arduous mission of making everyone satisfied.

In "Grinding It Out", Ray Kroc, one of McDonald's founders, says to find our differential. Don't let yourself be overwhelmed by a mistake that makes you give up your dream. Even the most successful people have already overcome several failures, which are part of the path to success.

Did you like this summary of the book "Viver e Deixar Viver"?

What interested you most? Did you learn something different and want to share it with us? Leave it in the comments!

If you want to know all the details of the book, click on the image below: 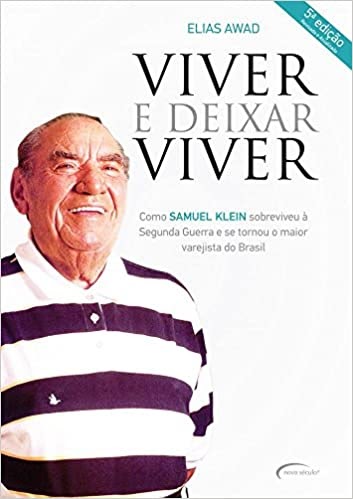