Do you see yourself without the technology? Will humans be replaced by robots in the future? Where are we going to stop? Learn here about the invisible Universe of technology.

In the book "Você, Eu e os Robôs", you will learn about some fundamental transformations arising from the Industrial Revolution. Martha Gabriel says she intends to help us and prepare for a world that is increasingly digitalized and technological, where human and machine are increasingly interconnected.

In the last decade, we have seen the internet become the world's leading platform for communication, relationships, entertainment and learning. This scenario is stunning and makes the internet the global collective brain.

However, Martha Gabriel is introducing this new panorama full of possibilities and also brings us new challenges.

We are living in the Fourth Industrial Revolution, in which the model of society is based on computational machines. Mobile technologies, voice technologies, 3D printing, artificial intelligence and robots, are examples of technologies and digital platforms that expand our scenario.

The change caused by digital technologies in society has happened very quickly, which challenges us both in physiological and cognitive terms. The digital age requires new skills from human beings, which were not part of education in previous industrial eras.

It is a manual for anyone to understand the Digital Age that we live in and its impacts in its most diverse dimensions (such as biological, social and economic), helping us to walk through the greatest human transformation since the emergence of Homo Sapiens.

Written in simple and objective language, the book starts from social issues and fundamental values that require a lot of attention in the current technological scenario.

About the author Martha Gabriel

Martha Gabriel is an engineer, with a postgraduate degree in Marketing and Design, a Ph. D. master in Arts and Executive Education at MIT. It is considered one of the main digital thinkers in Brazil.

Author of several books, including the bestseller "Marketing in the Digital Age" and "Educating: the digital revolution in education", she was a finalist in the Jabuti Award in 2014 in the Education category.

She is also an executive and consultant in the areas of marketing, business, innovation and education. She has used technology as a tool for business transformation since the beginning of her career, having helped large corporations in their development journeys.

Recently, has worked with digital transformation processes and the implementation of a culture of innovation to align with the new business context.

The reading of "Você, Eu e os Robôs" is recommended for all those interested in information technology, in addition to digital entrepreneurs, students of Sociology and all those who would like to have an overview of society.

Overview: The technology and us

Since the beginning of our history, technology and humanity go hand in hand. The human being is a techno-species: we create technologies and are transformed by them.

Since prehistory there has been a marriage between human and technology, which was with sticks and stones. We went through several technological revolutions as important as the one we are in today, such as writing, electricity, fire, etc.

However, a major challenge that any technological revolution faces, is that initially the tendency is to be enchanted with new technology, and not with its long-term effects on our lives.

After the emergence of electricity, people were amazed at the possibility of having equipment that produced low temperatures to conserve food, for example, but it was only after some time that they became interested in thinking how this technology would help them to live better.

In the case of electricity, it took approximately 30 years for humanity to understand its transformations, making a multitude of behaviors obsolete. In this way, technologies not only instrumentalize us, but also affect our social, cultural and psychic life.

Therefore, technology has recreated reality, founding civilizations throughout human history due to the transformations it gives rise to.

Martha points out that what really matters in a technological revolution is not the technology itself, but how it affects and changes our lives. The less time we spend to understand the new reality and change our mindset to a new model of civilization, the more successful we become in that context.

Overview: Distribution versus Centralization of Power

The Digital Era has made a paradox present to us: if on the one hand the hyperconnected scenario favors the flow of information, it distributes power and democratizes information, on the other hand, this context centralizes other forms of powers.

All the physical technological and software infrastructure that exists today on the internet is in the hands of a few organizations. Thinking about hardware and software, few giant companies control essential equipment through which connected information flows on the planet.

As the complexity of the technology has increased over time, these organizations have started to buy other emerging companies, so that a monopoly is consolidated.

How would people react if WhatsApp, Instagram and Google stopped working? What would the world be like without these technologies? Where is the information stored? With you, or in the "air"? The final reflection that remains is "who owns what"?

The book "Você, Eu e os Robôs" says that if we have the connected society in mind, at the same time that an individual gains a voice through social networks, all other individuals also gain the same power.

Therefore, it is more difficult to be "heard", because the power of speech is increasingly diluted among everyone.

This paradoxical effect of technology happens not only in information flows. For example, the same technology that allowed Uber to give greater power to people who used taxis to get around, also gave taxis greater power to structure themselves in other ways to fight it.

"Understanding the flows of power that are transformed by technology enables a more adequate holistic view of the social and economic scenarios that are outlined."

The word privacy derives from the Latin privatus and means "separate from the rest". It refers to the ability of individuals to reveal only the information they want, selectively.

Although the use of privacy varies from culture to culture, privacy is a selective principle of disclosure of personal information depending on the context.

For the exercise of privacy to become possible, people need to have some kind of control over the context in which they are inserted at a given moment, in order to be selective in relation to information they want to reveal or not.

In analog environments, contexts are easily recognized and defined, such as church, work, school or a party. On the other hand, in digital environments, it is much more difficult to recognize the context in which it is inserted and who is simultaneously present in it.

As an example, we can mention the moment when two people talk through a social network, each one is in a different analog context, but they are present in the same digital environment.

In this scenario, controlling privacy becomes very difficult, as it requires knowledge of contexts and people in the digital world, as well as requiring means that make it possible to control the disclosure of information for these divergent situations and environments.

Digital technologies allow faster dissemination of information and its immediate registration. While in analog environments much of what is revealed is shared by a few (physically) in that particular place, in the digital environment what is revealed may be being shared with thousands of people.

Therefore, the digital world is a paradise for the proliferation of data, being totally unfavorable to the maintenance of privacy.

Overview: Live now or prepare for the future?

The survival of species, as Charles Darwin taught us, depends on adapting to the changing environment around them. In the process, those who not only adapt, but who also have more control over the environment, not only survive, but also live better.

This is what mankind has been looking for and what has propitiated its evolution and all the development of technology until today.

Starting from that point, in an attempt to control the environment with the intention of obtaining better results, there are two alternatives that clash: live well now, using all available resources, or give up some resources now to enjoy in the future, ensuring long survival.

The daily choices related to resource management are based on knowledge of the future. The best way to make decisions is knowing tomorrow, and that has been one of the greatest human aspirations throughout our history.

If we know what is going to happen, we are better prepared for that, making a more adequate management of the resources available today - health, time, money, etc. - aiming to obtain the best results, both for now and for the future.

Technology, although it is not possible to predict the future exactly, presents us with "megatrends", which are "big waves" of change in which we are inserted, helping us in our quest to know where we are going.

Human beings and technology, since the beginning of time, are interdependent - when one changes, the other also changes, in a continuous cycle and at an exponential pace.

Not only are we merging with technology, merging our biological and digital codes, but also and mainly, becoming a new type of human, technologically reconfigured.

Among all dimensions of human life, the main one is survival, and work represents human action in the world to guarantee it.

Since prehistory, human work has been to find ways to obtain food and shelter, however, today work takes on several functions in an organized system with a much greater degree of complexity, resulting from the evolution of technology.

Technological growth is exponential and is reaching a dizzying pace that has challenged human life. If this acceleration is continuous, where are we going to stop?

One of the possibilities addressed by Martha Gabriel in "Você, Eu e os Robôs", is to evolve by mixing our biological code (DNA) with computational (binary) codes, forming a hybridization with the machines.

Another approach to evolution - humanity together with technology - is that this acceleration leads us to states of continuous improvement, generating an increasingly dense state, so that, at some point, the world transcends material existence and moves to a state superintelligence.

From then on, it will not be possible to predict anything else, we are just certain that humanity will enter a new era.

For Tom Chatfield, there is a close relationship between humans and technology. In the book "How to Thrive in the Digital Age", he says that along the advances, human beings have shaped new technological tools and these, in turn, shape their behavior.

In the book "Sapiens: A Brief History of Humankind", author Yuval Noah Harari reflects on the scientific advances of the human species and states that today we are already a union of man and machine. He adds, saying that we are heading towards a new species: superhumans.

Tamara Myles, in the book "The Secret to Peak Productivity", develops the "Maximum Productivity Pyramid" system, whose model teaches you to organize from the space you work in until you know how to decide what is most important and how to get closer to your goals. life.

Now that you are familiar with concepts and explanations in the book, how about recapping some main notions?

Did you like this summary of the book "Você, Eu e os Robôs"?

Did you like the summary we prepared for you? Leave your comment saying what you have learned, your feedback is very important to us!

The purchase of the complete work is available at the following link: 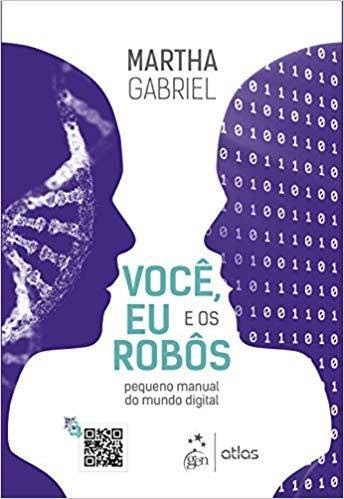