What To Do When Machines Do Everything - Malcolm Frank, Paul Roehrig, Ben Pring

Discover a hopeful vision for the future in the face of so much technology and job replacement.

Today, smart machines are everywhere, increasingly dominating our routine and ways of working. And that is what the book "What To Do When Machines Do Everything" is about, written by authors Malcolm Frank, Paul Roehrig and Ben Pring.

You may not know it, but it is through Artificial Intelligence (AI) that Netflix suggests movies and series. It's how Amazon indicates the right product to its customers or Facebook shows us relevant content in our newsfeed.

However, we are going through changes, AI is becoming something much more powerful than just a little help. Technological innovations are surpassing our greatest qualities in various jobs. Some examples are:

There are many other examples, however there is no denying that the machines have already outgrown some of our skills. The tendency for this to continue happening is great.

But nothing prevents us from taking advantage of this development of the machines.

Want to know how? Then stay with us!

About the book "What To Do When Machines Do Everything"

"What To Do When Machines Do Everything" has 256 pages. This work, written by Malcolm Frank, Paul Roehrig and Ben Pring, shows "how to succeed in a world of AI, Algorithms, Robots and Big Data".

The book is a practical guide that shows how to thrive in a new era, the era of intelligent machines.

A very interesting curiosity about the work is that the periods are short. It shows coherence, but not cohesion. This gives us the idea of a more robotized text. It's like we are talking to a robot.

About the authors Malcolm Frank, Paul Roehrig and Ben Pring

The work was written by three employees of Cognizant - a world reference company in the area of professional IT services.

Starting with Malcolm Frank, who holds the position of executive vice president of strategy and marketing.

Next, we have Paul Roehrig, founder of the Center for the Future of Work, and vice president of strategy and marketing for Cognizant Digital Business.

And finally, Ben Pring, who is currently head of Cognizant's Center for the Future of Work.

The book's indication, "What To Do When Machines Do Everything", goes to leaders, managers, students and investors in the field of Artificial Intelligence (AI).

The content of the work is also ideal for those who wish to have a general knowledge on how to apply AI in the company they work for, and who also has the objective of generating profit.

Overview: When machines do everything, what happens to us?

Despite the fact that machines have changed constantly, since the First Industrial Revolution, our concerns are the same: "Will machines take my job?"

Around 1800, the Luddites responded to the introduction of machines in their work, breaking them. They did this because they thought their activities were in danger of being replaced. Finally, they were correct.

We have another event. At the beginning of the 19th century, approximately 80% of workers in the United States worked in agriculture. Currently, that number does not even reach 2%.

According to authors Malcolm Frank, Paul Roehrig and Ben Pring:

"When the steam engine allowed mechanization during the Second Industrial Revolution, specialists were concerned about the possibility of 'replacing human labor by the machine' 'rendering the population superfluous'."

At present, this thought is still relevant. There is a study by the University of Oxford estimating that, in the next decade, approximately 50% of jobs are likely to be replaced by machines.

Although we are not sure what will happen from now on, there are reasons to believe that growth is about to happen. According to the book "What To Do When Machines Do Everything", there are three:

In general, there will be a big change in the workforce and knowing "what to do" in this new context will certainly become an advantage.

In the view of the authors Malcolm Frank, Paul Roehrig and Ben Pring, the workforce in the G7 will be modified in three different ways: Automation of jobs, Improvement of jobs and Creation of jobs.

For them, any and all predictions of the impact of machines on jobs, necessarily, consider these three aspects: automation, improvement and job creation.

Now, to understand the next world scenario, it is necessary to analyze four fundamental topics covered in the book "What To Do When Machines Do Everything", which are:

Overview: AHEAD Model - Five ways to seize the new machine

We will see the five ways to create successful digital business. Consider which strategy (digital initiatives and operations) fits into each category.

There are a few key questions that can help us. Is it possible to automate a process that already exists? If there is a chat portal, is it possible to deploy an AI-based service?

Well, if your company is specific, there are probably some processes that can be automated.

According to the book "What To Do When Machines Do Everything", in the coming years, any product that costs more than US $ 5, excluding food, will be instrumented. That way, you must instrument all of your products and machines in your business plan.

"What common objects can be smart? What data can you generate that will help you see things that were invisible before?"

Use the machines to increase employee productivity and also generate more customer satisfaction.

How can you use machines to reduce costs and increase the size of your current market? We are talking about dozens of times lower costs, 80-90%. You may think it's impossible, but will it really be?

What are the possible discoveries in your company? In fact, what possibilities do you have, with the use of machine innovation, to transform your company's Research and Development process?

According to authors Malcolm Frank, Paul Roehrig and Ben Pring:

"People who have succeeded with their digital initiatives tend to have a clear reasoning about their purpose."

They balance the five values; automate a business process, increase the value of the existing product by collecting data around it, improving human activities with digital tools, enabling mass market consumption with its offerings, or creating an entirely new offering with a technology-based invention.

Don't stick to generic models. If you think such behaviors are useful, you will quickly have serious difficulties. Generic models are nothing more than gullibility.

Cláudio Torres, in "The Digital Marketing Bible", says that Artificial Intelligence also has a wide portfolio of possibilities.

The book points out the importance of its application in the use of virtual assistants, who can act in customer service through chats and in the recognition of patterns, classifying documents and recognizing products.

Eric Ries, in "The Lean Startup", explains that it is important that the word "innovation" is widely understood. Original scientific discoveries, a new use for existing technology, the creation of a new business model, among others, can be found.

Finally, we have the work "The Big Nine". In it, author Amy Webb reports how Artificial Intelligence has given us great benefits.

However, some global powers have used it to invade privacy and authority over people. She then states that if we continue like this, humanity will face a dark future.

As continuously presented, Artificial Intelligence is not on the way; She already arrived. The purpose here is to show you that there are many possibilities for what you can do (and should) when machines do everything.

According to the quote from the book "What To Do When Machines Do Everything":

"Those who win in the great digital construction expected, who reap the incredible rewards that make history, will be the ones who stopped debating and began to create, and, instead of predicting the future, they went out and invented it, side by side with the new machines."

Did you like this summary of the book "What To Do When Machines Do Everything"?

We hope that the teachings of authors Malcolm Frank, Paul Roehrig and Ben Pring will help you thrive in the age of intelligent machines. Leave your opinion in the comments, your feedback is very important to us! 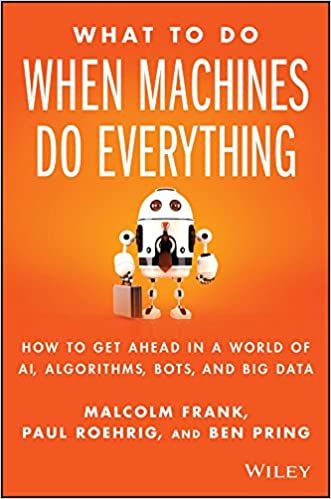