According to Stanley Milgram's theory of separation, we are six degrees away from any other person. But what if they are all from different cultures? Learn how to avoid "Culture Clash"!

Thanks to globalization the world is increasingly dynamic and connected. In the business world this could be no different, more and more companies are going through the process of internationalization and becoming global.

If you plan to work or currently work with teams of different nationalities and cultures, this summary of the book "When Cultures Collide: Leading Across Cultures", by author Richard D. Lewis, is made for you.

It is a didactic guide with examples of practical situations that help you understand how cross-cultural relations work in the globalized business world. It also teaches you how to create an organizational culture that respects and values diversity.

Are you ready to learn how to avoid “culture clash” and be a globalized leader? Then let's go!

About the book “When Cultures Collide”

“When Cultures Collide: Leading Across Cultures” was originally published in 2005 by Richard D. Lewis. The book is currently in its 4th edition, published in 2018.

The book consists of 625 pages divided into 3 parts (Getting to Grips with Cultural Diversity; Managing and Leading in Different Cultures; Getting to Know Each Other).

In this publication, not yet translated into Portuguese, Lewis explores the dynamics between global business and intercultural communication. He dedicates a country-specific analysis, explaining in detail about each national culture.

Who is Richard D. Lewis?

Richard Donald Lewis was born in 1930 and is a social theorist and intercultural communication consultant. He graduated in Modern Languages at the University of Nottingham, England, and also gained a diploma in Cultures and Civilizations from the Sorbonne in Paris.

Additionally, in 2015, he was awarded the SIETAR Founders Award, given to an individual who has demonstrated exceptional commitment and service to the intercultural field.

Lewis, along with Kai Hammerich, is also the author of the book “Fish Can't See Water”, which is recognized as a practical guide on how national cultures impact corporate strategies and their execution.

He is notoriously known for creating the "Lewis Model of Cross-Cultural Communication", which provides a practical framework for dealing with people from other cultures.

Who should read “When Cultures Collide”?

"When Cultures Collide: Leading Across Cultures" is ideal for leaders who plan to work or already work with teams of different nationalities and cultures.

It is also worth reading for those who want to understand how cross-cultural dynamics work in international negotiations.

Main teachings of the book “When Cultures Collide”

Download the “When Cultures Collide” Book Summary in PDF for free

Us and Them: why is there relativity in frames of reference?

As humans, we share similar characteristics and as a society, too. However, the behavior of people from different cultures is not something shared or homogeneous.

Despite this, Lewis believes that we should be optimistic about cultural diversity. He points out that there are clear trends, sequences, and traditions that allow us to understand and learn how to see from the different angles and perspectives that others do.

So by focusing on the cultural roots of national behavior, both in society and in business, it is possible to predict and calculate the reaction and response of others. This is of utmost importance when we are talking about the global business scenario.

Global cultures, but not so global

Even with globalization, there are still national norms that guide human behavior.

Lewis warns, however, that determining the behavior of individuals using only their culture as a parameter is like stepping into a minefield of inaccuracies, evaluation, and surprising exceptions.

It is worth noting that some countries such as Spain, Brazil and Italy have strong cases of regionalism. Regional characteristics often outweigh national ones, which is why it is important to know well the other part you are negotiating with.

When negotiating or leading someone with a different cultural focus, it is necessary to understand what the person's original focus is. In general, the cultural focus is centered on the corporate world, the family, themselves, or gender relations.

The Lewis Model of Cross-Cultural Communication

From this idea of focus,the Lewis model makes it possible to classify cultural norms into Linear-Active, Multi-Active, and Reactive, or combinations among them. 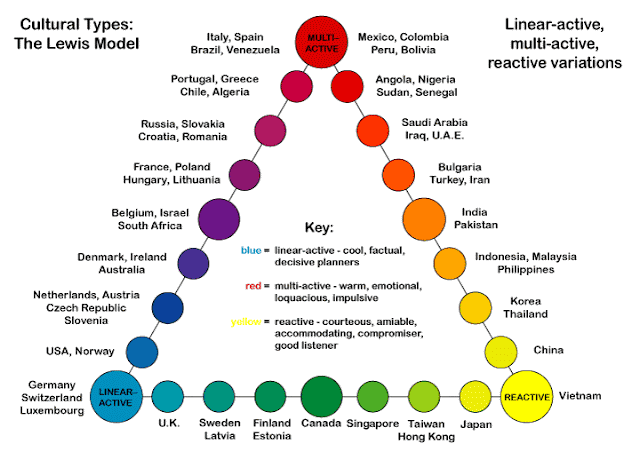 Richard D. Lewis believes that comparisons of national cultures usually begin by highlighting differences in social behavior. Such behavior is directly linked to the language an individual uses to communicate.

Concepts and notions such as humor, truth, contracts and ethics, common sense, gossip and silence end up creating different mental constructs for each person, generating a difficulty of association between languages. The author states that:

“For a German and a Finn, the truth is the truth. In Japan and Britain it is all right if it doesn’t rock the boat. In China there is no absolute truth. In Italy it is negotiable.”

In “When Cultures Collide”, the author explores the anthropologist Benjamin Whorf's idea that the language we speak deeply determines our way of thinking, as distinct from merely expressing it.

This causes powerful mental blocks to hinder communication and generate the need for interpretative translation to contextualize the dialogue.

It is, therefore, important for managers to carefully consider the implications of expressing different languages in different worlds. Foreign manners and mannerisms may seem eccentric to us, but we are far from normal to them.

Another factor to take into account is the way that the "speaking-listening" process works for each individual. Communication is a human characteristic, but its patterns differ among the behavioral types proposed by Lewis.

The very pattern of communication between the leader and other team members will be altered intensely depending on how the hierarchical and behavioral structure of the organizational and national culture works.

How to manage the “Culture Clash”?

According to Richard D. Lewis, culture is almost a form of national adequacy:

“We think our minds are free, but, like captured American pilots in Vietnam and North Korea, we have been thoroughly brainwashed. Collective programming in our culture, begun in the cradle and reinforced in kindergarten, school and the workplace, convinces us that we are normal, others eccentric.”

As a consequence, we end up thinking that we are the standard rule and the other is a strange being, almost an alien. Because of that, the author says that the bases of cultural beliefs are our own culture, a similar culture, and an "alien" culture.

The lack of empathy makes us reject dialogue and cultural diversity, which is extremely damaging to international businesses. The first step for a global leader who wants to avoid culture clash among their team is to be open to learning more about their manners and mannerisms.

The author considers manners and mannerisms to be the social behaviors practiced by individuals and that govern their everyday actions. Issues such as taboos, acceptable degree of sincerity, etiquette, and manners that are practiced by these individuals must be learned.

Also, simple things like the use of time, sense of personal space, greetings, and small talk are fluid and change from country to country. Sometimes they change within the country itself as is the case in Brazil with the number of kisses you give when greeting someone.

How is Intercultural Leadership exercised?

With the advent of globalization, many companies needed to adapt to the new leadership model that emerged in the 21st century. Along with hierarchical restructuring came the cross-cultural leadership model.

While some multinationals avoided or postponed intercultural training, others used cultural plurality to grow in different markets. As a result, many of today's leaders are from less usual places like India, Russia, China, etc.

Leaders can be born, elected, or trained and groomed; they can take power or have leadership imposed on them. But this does not mean that all leaders are ready to take on the management of a multicultural team.

Just as there are different types of leaders, we have different concepts of status, leadership, and organization. The first question a global leader should ask is "what is work for the team?" and then move on to the other criteria such as hierarchy, prestige, and organizational structure.

When building a multicultural team one should take into account the following criteria:

Although there is no international formula to motivate the team, creating personalized dynamics helps to build a sense of belonging among the members.

How to trace a behavioral pattern?

When Richard D. Lewis created his model of cross-cultural communication, he aimed to create categories that would predict the behavior of a culture, clarify why people did what they did, avoid offenses, seek some kind of unity between individuals, and standardize policies.

Understanding the “strengths” and “weaknesses” of each culture allows a behavioral and opportunity analysis. Therefore, it is possible to know whether the foreign scenario will be profitable for the company's internationalization or not.

The traits of each type are:

Mapa mundi: what are the Lewis' 9 groups?

In the part entitled “Getting to Know Each Other”, Lewis presents the division of countries into groups to make it easier to describe them. There are nine major groups:

Each of them will have a profile that presents different motivations, views on cultural globalization, how to be empathetic to each nationality, and what to avoid in order not to offend each of these cultures.

The author himself understands that we often use only stereotypes to guide the negotiation process between different parties. For a global leader, this is unacceptable, as he must learn about the other in order to establish a fruitful negotiation.

Nevertheless, according to Richard D. Lewis, we cannot live without stereotypes, because they are what give us reference to each other. For intercultural understanding we must learn to manage stereotypes, that is, we maximize and value what is positive and minimize and laugh (if possible) at what we see as conflicting or negative.

Knowing how to manage stereotypes will be the greatest tool for successful intercultural leadership. Since any good international negotiator needs to know the differences between cultures, but take advantage of the similarities we share as human beings.

In addition, the good international negotiator needs to adapt to the rapidly changing perspectives and strategies of international management, a result of the Information Age. Obtaining data, analyzing that data, and generating information that can be used to benefit the business has become an imperative, something we must always do.

Other books about cultural multiplicity of companies and people

In “Everybody Matters”, the authors Bob Chapman and Raj Sisodia explain how true leaders constantly seek to expand their knowledge, improve themselves, and develop those around them. The main goal is to be excellent leaders who value people's plurality.

Sandro Magaldi, in “O Novo Código de Cultura” (The New Culture Code), believes that it is important to understand what the company's identity is. It is necessary to define the company's characteristics, beliefs, values, and behaviors. After this, it is possible to know which path the new organizational culture will follow.

Lastly, the book “Sapiens”, by Yuval Noah Harari, which explains how culture was created as a form of domination, a series of "artificial instincts" to generate a sense of belonging strong enough to ensure the survival of these groups within society.

Okay, but how can I relate to different cultures?

Rate this summary of the book “When Cultures Collide”!

Did you like this PocketBook? Send us your feedback and rate the content, so that we know what your opinion is! And if you want to purchase this cultural guide in full, just click on the image below: 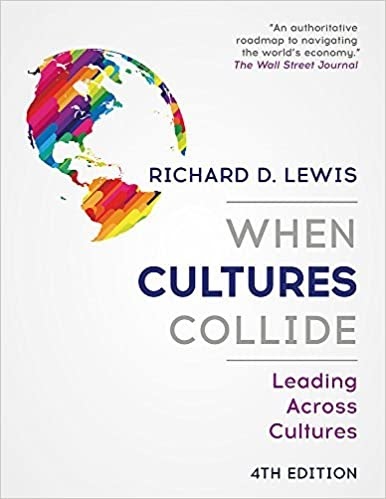