Who Moved My Cheese? - Spencer Johnson

Learn from a simple and fun story how to deal with change in order to live with less stress and achieve success in different areas of life.

"Who moved my cheese?" from the author Spencer Johnson is a parable that reveals profound truths about change. The narrative leads us to reflect on our reactions and attitudes in the face of unexpected situations that appear in our lives.

More than that, the book offers a variety of teachings about our internal processes of change, acceptance, and facing fear, and serves as an inspiration for us to strive for our goals and achieve personal transformation.

Tie your sneakers and get ready, because in this PocketBook you will enter a maze in search of your cheese!

About the book "Who Moved My Cheese"

With 109 pages and great teaching, the best seller, "Who Moved My Cheese?", by Spencer Johnson, presents different ways of dealing with life changes.

The work is a parable that tells the story of four characters: Sniff and Scury, two mices that adapt quickly to events, and Hem and Haw, two little men who have difficulties adapting to new circumstances.

About the author Spencer Johnson

Dr. Spencer Johnson was a doctor, psychologist and writer of children's books. He wrote the best-selling Who Moved my Cheese and "Out of The Maze". He is also co-author of "The One Minute Manager".

In addition he acted as a member of leadership at Harvard Business School.

The number of copies sold by Johnson exceeds 10 million, being translated into more than 25 languages.

"Who Moved My Cheese" is indicated for entrepreneurs looking for a better way to manage change at work and people who need to deal with interpersonal relationships of any nature.

It is a narrative full of teachings on how to look at life differently, learning that acting with your head is better than clinging to the past.

Main ideas of the book "Who Moved My Cheese?"

Download the "Who Moved My Cheese?" Book Summary in PDF for free

Overview: The history of the Story

Changes. This story told by author Spencer Johnson is about spontaneous changes in our lives, so that the only resistance encountered is ourselves.

In this way, the book begins by portraying a group of friends who had come together to remember their school days, when a discussion arises that each person's life has changed in a way that they would never have imagined.

And to illustrate this, one of the friends tells the story of "Who Moved My Cheese?", A narrative with four characters: Sniff and Scury (rats) and Hem and Haw (little men), who were always looking for a special cheese, believing that this would make them more prosperous and fulfilled.

To do this, the four of them went through a confused labyrinth every day in search of this product, using the skills they acquired with the vast experience of life over the years.

Until they found it! Yes! Each one found their cheese at Point C, which totally changed their routines.

The habits and behaviors of the little men have changed, because now they already knew where they would find the cheese, regardless of the circumstances that caused the product to be there.

After finding the cheese, Hem and Haw, the human characters, believed that the full life was already guaranteed, after all, they had to work hard to find what they wanted so much. They gave themselves the luxury of waking up late, as there was no longer the worry caused by demand.

However, Sniff and Scury, the mice, kept the same routine, waking up early and checking if something had changed, because even if they had already found what they wanted, it was necessary to keep it.

Until the Cheese disappeared, as the mice already assumed.

As narrated by Spencer Johnson in his book, "Who Moved My Cheese?", The animals reacted quickly, returning to the search stage, while the humans were incredulous, had taken away their happiness. They still did not know what to do, immobile.

It didn't take long for the rats to find a new stock of cheese, while the humans were still in the denial phase, trying to blame someone for what had happened.

It took time, but the little men made a decision: every day they returned to the post where they had found the cheese and sat there, waiting for it to return again.

However, Haw, one of the little men, realized that this was a waste of time, that there was no point in regretting yesterday's cheese, it was time to look for the new one.

According to author Spencer Johnson, he entered the maze again and, whenever he felt unmotivated, he remembered the reason for doing that, taking control of the situation.

And as he was afraid of never finding what he was looking for, he got himself free from it by moving to a new direction, reflecting on everything that was happening, making the search fun and motivating by imagining himself mentally consuming the cheese, its smell and the taste.

That way it was much easier to believe that I would find him.

Haw began to unravel the maze as quickly as he could, following clues and discovering new small pieces of cheese, even though the place was empty. He took the few pieces of cheese that remained and took them to Hem, who, although he appreciated his friend's gesture, did not want a new cheese, but the old one.

According to the book "Who Moved My Cheese?", Haw then continued his search, not caring about his fear of not finding the cheese, as it would not paralyze him as he did with Hem.

He thought about how he had changed since he decided to return to the labyrinth and chose to venture into the corners that he did not yet know, without fear, because now he had freed himself from the bonds of the past, he was no longer thinking about life before.

He found a new station full of cheese, station N!

When he came across the amount of cheese he had found at the new post, he noticed that it was the biggest post he had ever found, there was a lot of cheese everywhere.

Haw realized that believing that he would find the cheese was essential for him to actually find it, and that the maze was his process of change.

He realized that sometimes we are so anxious to want to achieve our goals that we forget to take advantage of the path and understand that it is transformative.

He thought of going back to find Hem, showing him the new post and sharing with him what he had found, but reflecting on everything that had happened, he realized that Hem must find his process of change so that he believed it was possible to achieve the goals.

The author Spencer Johnson tells in his book, "Who Moved My Cheese?", That he also learned to plan so that he never lacked anything, always watching for signs that he would not be surprised again. He had become a new man.

Overview: Returning to the first story

Do you remember the first story told by author Spencer Johnson? The story of friends who were in a fraternization of the school class and who started the narrative of "Who Moved My Cheese?".

When one of the friends finished telling it, everyone began to reflect on the characters, in order to find what they should change in themselves so that they would not become people afraid of challenges.

They realized that while this story sounds like a children's tale, it has a lot to teach us about life and how we are leading it.

Finally, the group said goodbye. After all, it was time to leave the post.

Have you left the spot today?

In "The Power of Positivity", Geraldo Rufino shows us that adopting a positive mentality in the face of problems reduces the chances of despair, as we are in control of the situation. As in "Who Moved My Cheese?", Rufino points out that we have the power to achieve everything we want, just believe.

In "Awaken the Giant Within", Tony Robbins will make you grab the changes, as they are opportunities for growth.

Robbins and Spencer Johnson seem to have a very similar view that we must leave the beliefs of the past in order to achieve our goals, through a profound transformation in ourselves.

Another book very suitable for you who want to make transformation your cheese is "Unfuck Yourself". In this book, Gary Bishop presents perseverance as a journey of success, in which we must accept the past but not cling to it, and that change is necessary to live.

Did you like this summary of the book "Who Moved My Cheese?"

So, did you like the summary? Leave your feedback, we want to know your opinion!

You can also purchase the complete book, with all the details of the author, by clicking below: 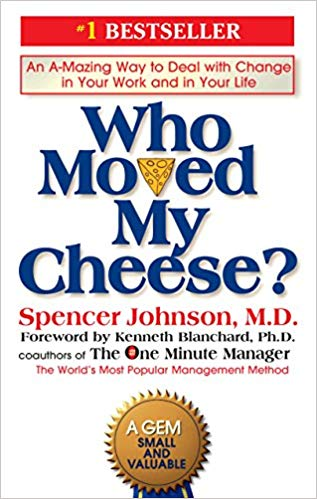