Discover how to solve your business problems through the lessons of the entrepreneur who raised one of the largest computer companies in the world: IBM.

Do you know what keeps a business running smoothly? Have you ever wondered why some companies manage to survive in times of storm and others do not? In the book "Who Says Elephants Can't Dance?", author Louis Gerstner answers these and many other questions about business crises.

In addition, with valuable lessons, he teaches you what to do to change the landscape of your company, showing you how to make it grow again when it is "rock bottom".

In this PocketBook, you will learn a lot from the main tips of this entrepreneur, and understand how to put them into practice in your enterprise.

Want to know more? Come and we will explain how to solve your problems!

"Who Says Elephants Can't Dance?", written by Louis Gerstner, was published in 2003 by Harper Collins.

In the 292-page book divided into twenty-seven chapters, the author shows his trajectory at the helm of IBM (International Business Machines Corporation) and tells how he saved the company from possible extinction.

Who is Louis Gerstner?

Louis Vincent Gerstner Jr. is an American businessman who served as IBM's chairman and a chief executive officer from 1993 to 2002.

In addition, he was previously CEO of RJR Nabisco and held positions at American Express and McKinsey & Company.

Louis has a degree from Dartmouth University and an MBA from Harvard Business School. In addition, he is a member of the National Academy of Engineering and the American Academy of Arts and Sciences and has received honorary doctorates from several US universities.

Why should I read the book about IBM?

In "Who Says Elephants Can't Dance?" you can learn instructions and tips to turn the game around if your company is at risk.

In addition, the work is suitable for everyone who wants to learn more about the business through real stories of failure and overcoming.

What are the key points of the book "Who Says Elephants Can't Dance?"

Download the "Who Says Elephants Can't Dance?" Book Summary in PDF for free

In this opening part of the book "Who Says Elephants Can't Dance?", author Louis Gerstner tells the story of how he fought the idea of taking over from IBM. After that, he makes some highlights of his first year at work.

Gerstner also explains how he dealt with IBM's severe financial crisis in the early 1990s and managed to keep the company alive. In addition, he reveals how precarious Big Blue's financial situation (popular name given to the company) was at that time.

The Arrival of Gerstners at IBM

In 1990, IBM had its most profitable year of all time. By 1993, the computer industry had changed rapidly. The company suffered the consequences of these transformations losing billions of dollars.

The company has been hampered by its sheer size and the new age of the computer it has helped invent.

So Louis Gerstner was hired to run IBM. Many people assumed that he had joined the company to chair its dissolution into autonomous business units.

Instead, Gerstner took over the company and made important decisions that would change IBM's landscape. He held the company together and transformed its market image.

According to the book "Who Says Elephants Can't Dance?", upon arriving at the helm of IBM, Gerstner outlined strategies and summarized the following philosophy he adopted during his managerial role:

According to Gerstner, saving the company required making decisions and making drastic changes. After much customer and market research, and after meetings with employees and coworkers, he concluded that it was necessary:

According to the book "Who Says Elephants Can't Dance?", when outlining his strategies to save the company, author Louis Gerstner started by creating a leadership team.

Assembling a management team and uniting it is not an easy task, in each company the process is different. You need to know who to trust and build your team's trust.

For Gerstner, one of the biggest changes involves the Board of Directors. Within IBM, it reduces the number of board members to facilitate management and communication.

In addition, it is of great importance to increase and improve communication with employees. If employees do not believe that the crisis is real, they will not endeavor to change this situation.

In this section of the book "Who Says Elephants Can't Dance?", Louis Gerstner gives more details on how he transformed IBM to keep the company together and get it on top again.

According to the author, many industry experts said that the only way to avert a disaster was to close IBM. But he decided to preserve the company and maintain the quality service that he believed IBM brought to customers.

The right strategies are what keep a company strong and united. When building your strategies, you need to think through all the details of your business and focus on each one. A good strategy is one that:

When in crisis, IBM executives bet on something different from what they did to try to survive. In addition to designing and selling its products, the company has invested in ways to solve problems for its customers in computing.

However, many business owners are unwilling to face the battles necessary to restructure and strengthen their businesses. As such, they end up giving up on their venture and closing their doors.

A major IBM strategy was to choose to compete with industry rivals by entering new markets but always trying to keep the customer happy.

Thus, it was necessary to open an IBM store. This process did not concern the sale of parts of hardware and software components in stores. IBM made room for companies to gain access to a patent portfolio, or its technological process, from licensors to technology vendors.

The culture of a company is its personality. It defines the environment in which employees work. Company culture includes a variety of elements such as:

So for Gerstner, transforming IBM's culture was essential.

In the corporate culture

For the author Louis Gerstner, a company's culture is not part of the game, it is the game. An organization is represented by its collective ability to create values.

Many companies establish their values based on the market in which they arose. However, when the market renews itself, such values remain the same - often outdated - which diminishes the company's ability to adapt.

The book "Who Says Elephants Can't Dance?" explains that many companies base their culture on their creator. IBM's case is no different. The company's values met the beliefs of its founder, Thomas J. Watson:

However, after the company's near extinction, it had to change its values because the old ones no longer corresponded to the beliefs of the new IBM.

Being responsible for bringing IBM closer to its customers, Gerstner worked out eight principles that would be the cornerstones of the company's new culture:

In this part of the book "Who Says Elephants Can't Dance?", author Louis Gerstner reveals what he has learned from his experience at IBM.

There are three fundamentals that characterize successful businesses and entrepreneurs, and they can be the foundation for any business, large or small:

All major companies struggle to outperform their competitors daily in the marketplace. Everyday life in the business world is made up of attitudes, not just ideas.

Thus, the author states that execution is the most important part of the strategy. It is about turning all your strategies into actions and analyzing the results.

Knowing how to do it means doing the right things faster, better, and more productively than your competitors. To this definition, Louis Gerstner gives the name of "High-Performance Culture".

The company has employees committed to success, true leaders and people focused on quality.

"Big institutions are not managed, they are guided."

Many people believe that small businesses work well and large companies do not. However, this is not true. Gerstner says that a company's performance is not measured by its size.

It is not about saying that large companies predominate over small ones, or that elephants are better than ants. It's about knowing that "if an elephant can dance, ants must leave the dance floor", the book "Who Says Elephants Can't Dance?" says.

That is, despite the great extent, large companies can rise after a crisis without having to decentralize or close their doors. Therefore, we need to develop and apply strategies that keep a company together, always thinking about employee well-being and customer satisfaction.

In "Good to Great", Jim Collins explains why some companies can go so far and others not. He teaches you how to grow your business, seeking better numbers and results. Collins shows how to leverage your business by raising your concept from "good" to "excellent".

In the book "Execution", written by Larry Bossidy and Ram Charan, you learn how to strategize and set goals that lead to good results. The authors explain how many companies do not grow due to poor execution.

Finally, in "Innovate or Die", the author Luiz Guimarães introduces a proposal that seeks to modernize and innovate companies to adapt them to the digital age, focusing mainly on customers.

The work brings reflections that help to better understand the changes and their causes, besides stating that it is not necessary to be a startup to innovate.

So, how can I make my business successful?

Did you like this summary of the book "Who Says Elephants Can't Dance?"?

We hope you enjoyed our summary and are able to apply the teachings of the author, Louis Gerstner, to your business. Leave your opinion in the comments, your feedback is very important to us! 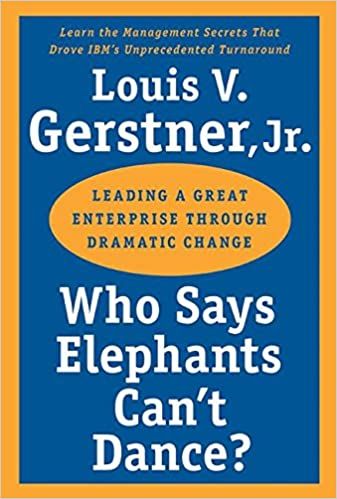