Discover the persuasion strategies that led to the victory of former President of the United States, Donald Trump, and learn how to use them in any situation.

Scott Adams analyzes in his book, "Win Bigly", tools of persuasion that can work in various situations, after predicting the victory of the former President of the United States, Donald Trump, when he had minimal chances of gaining power. According to the author:

"If you need to convince people that something is important, make a statement that is directionally correct, but contains a lot of exaggeration."

In this PocketBook you will learn which components of your message are important and how to approach them, and for that you must find a phrase that will hit your audience on an emotional level.

Normally, we all tend to respond, not to reason, but to emotion. Listening to just 10% of a speech - a phrase here, a movement there - we can decide that we agree with the speaker, but for that he needs to employ the right techniques.

That is, everyone will focus on the mistake and remember the issue as being a high priority, so stop wasting time preparing elaborate presentations.

Are you interested in the content of our summary? Then read on and learn the art of persuasion!

About the book "Win Bigly"

The book "Win Bigly", launched in 2018, was written by Scott Adams and shows persuasion in a world where facts don't matter.

It has 322 pages that are divided into 5 parts:

About the author Scott Adams

Scott Adams, american born in 1957 in New York City, is the creator of Dilbert - cartoons that satirize business life and appear in about 1550 newspapers and magazines around the world.

He has held various positions in large companies and has accumulated many experiences through his failures. Adams is also a speaker and author of nonfiction bestsellers, among them: "How to Fail at Almost Everything and Still Win Big".

Reading is indispensable if you want to persuade others in any field - or simply want to resist these methods when they are used against you.

According to the author:

"This book was not designed to change your mind about politics or about Trump. All I want to do is teach some things about persuasion."

Initially, the main insights of the book, in small sentences, are these:

Download the "Win Bigly" Book Summary in PDF for free

The author Scott Adams, in 2015, stated on his blog that Donald Trump had a 98% chance of winning the election for the presidency of the United States of America. He made this statement based on the candidate's persuasive skills:

"Trump is what I call a master persuader. This means that he has military-level persuasion skills. And, after watching him in action, I have to say that he is the most persuasive human being I have ever met."

There are some types of persuaders, but the author classifies a master persuader as follows:

"Someone with such skill in persuasion techniques that he can change the world. Steve Jobs, Tony Robbins and several presidents are some examples."

In fact, why did Adams say the chances were 98%? He had no way of really knowing the possibilities. Well, this is a persuasion technique. It works like this:

So Scott Adams chose 98% because Nate Silver of FiveThirtyEight. com used 2%. According to the book "Win Bigly", the goal was to persuade and stand out.

The author managed to increase his profile through membership, that is, by pairing his name with Silver's, he was being compared to someone already known in that field.

Overview: Attract attention where you want it

Several times, Donald Trump used a technique that is based on being intentionally wrong. The goal is to attract attention wherever you want.

According to the quote by Scott Adams in his book "Win Bigly":

"It works even when you know what he's doing. If he is talking about any subject he wants you to touch on, he has his mind where he wants it, even if you are criticizing him for his mistakes."

Let's look at a situation where Trump made use of this technique. In his campaign, he made a promise to build a wall on the border with Mexico. Now, we know that there are more efficient solutions to protect the border, than simply building a wall.

He could have cited such solutions when he brought up the subject. But, for the most part, he purposely disregarded these details. When saying "wall" people noticed the error, started talking about it, checked the facts and analyzed cost estimates.

Everyone criticized Trump for not understanding that there could be no "wall" for this purpose:

"How could he be so stupid?"

After criticizing him, people had already made sure that border security was more important than they initially thought.

The presidential candidate got everyone to think about it. But he did so because he knew that voters would regard him as an authority on the issue, even if he was the target of criticism.

And, to eliminate criticism, all that was needed was to explain that the "wall" was based on a range of solutions, depending on the terrain and the cost involved.

The most important point to highlight is the following:

"The ideas you think about the most are the ones that automatically and irrationally climb your mental priority list."

In the Trump campaign, we saw him use nicknames for his opponents. Several of them took it, while the nicknames that his opponents gave him not so much, some were: Donald Duck; Donald the dangerous and Drumpf.

Don't think it was a coincidence. Let's look at some of them:

According to author Scott Adams in "Win Bigly":

"Trump used unusual words in political campaigns to violate our expectations and make the nicknames 'discouraged', 'pie' and 'liar' memorable."

The denominations were visually adaptable to each person. Jeb Bush did seem apathetic (after Trump persuaded us to look for it).

The nicknames were given in a strategic way, having the contrast as a basis. Many people did not believe in Trump's reasons and integrity, so he dubbed his main competitors.

This equated the contrast between the credibility of his enemies and his.

Human beings are usually visual creatures. We believe in our vision before we believe any other opinion that comes from the other senses. So, to persuade, the work "Win Bigly" explains that you must use images and visual stimuli.

Let's look at a situation in which Trump made use of this technique. Several times he talked about the Islamic State, using expressions like "cut heads" and "drown people trapped in cages".

According to author Scott Adams:

"You can't be more frightening and visual than that. And that persuasion gave him space to be the most aggressive on the subject, to the point of scaring half the country in the process."

For those people who fear terrorist attacks, Trump has persuasively shown himself as the most severe chief. The images illustrated in each individual's mind were vital to this.

Robert Cialdini, in "Influence: Science and Practice", highlights what we can do to "protect" ourselves from experts in taking advantage of our hasty reactions, and in the same way, it also enables us to develop the power to persuade.

Now, in his other work "Pre-Suasion", he presents a new idea: what happens before you try to influence someone has profound effects on whether or not you will succeed.

Cialdini calls this crucial moment "pre-suasion", and it happens before you ask a favor, present an argument, convince a client, bargain over a price, negotiate a raise, or even make a proposal.

We also have "How to Win Friends & Influence People". The author and speaker Dale Carnegie provides in his book techniques and methods in an extremely direct way so that anyone can become more captivating, persuasive and efficient.

In 2014, Apple experienced problems with its iPhone 4 smartphone. When holding the device in a certain position, the connection dropped.

Steve Jobs said in an interview:

At the time, Jobs was the target of much criticism for his response.

However, Scott Adams explains in "Win Bigly" that the entrepreneur's words are the application of a technique called high ground maneuver:

"The strategy involves taking the argument to a level where you can say something absurdly true, while at the same time changing the context. Once executed, the other participants will seem petty if they direct the argument back to the details."

Note the words Jobs used, it is indisputable, smartphones are not perfect. By using them he took the context to a higher level. It is a technique that you can use everywhere.

Did you like this summary of the book "Win Bigly"?

We hope you enjoyed our summary and are able to apply the advice of author Scott Adams to your life. Leave your opinion in the comments, your feedback is very important to us! 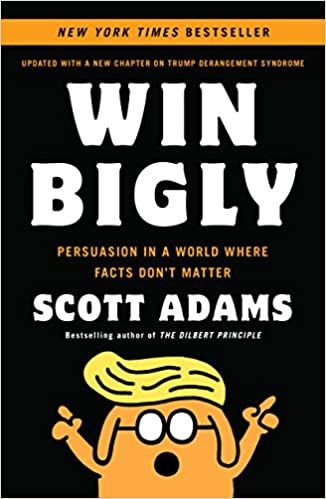 The content presented above reflects the vision and critical analysis of our writing team, respecting the fundamentals of intellectual property in Brazil (article 8, item I).
No part of the book is being copied. They are unique and exclusive content, always giving credit to the authors and indicating the link to purchase the complete work. PocketBook4You respects the copyright code in accordance with Brazilian law, Law 9.610 / 98.
This content is the exclusive property of PocketBook4You and is protected by Copyright Law in its articles 46, I, (a) and its article 47, because it is not reproduction and do not imply any discredit, on the contrary, the moral right is protected and, as noted earlier, the reader receives a link to acquire the work. Reproduction of this material without permission of the company is prohibited.

Do you believe that you and your employees are making the best decisions for the...

The Art of Negotiation - Michael Wheeler

Negotiating is a process. Learn here how to take full advantage of this process ...

The secrets of the powerful influence have been unveiled. Learn techniques to ap...